I put fun in inverted commas because work is actually pretty fun and I want to be very careful about defining my life as only what happens outside of work, which is where I spend most of my time (and vice versa).

Anyway, my recent New York trip was two weeks ago now but I still want to immortalize it on here. It was the ever-so-controversial Columbus Day weekend, and we had Monday the 9th off of work so I decided to take the Megabus up to the city since tickets were also pretty cheap. I basically spent the whole time just meeting my friends and catching up with people. First, I met my friend Eliza who was one of my hallmates in the Quad during my freshman year. Then, I had dinner with Ken near Columbia, where he’s a first year PhD candidate!!!! (Sorry, I just get really excited about that still) He had two friends visiting him that week, so we all had dinner together at this pizza place and I absolutely loved the food and how quiet it was around the Columbia area. It was really nice to see Ken and I got to see his apartment as well, which was cool. It felt a little strange to be in a dorm with my college friend—just in a different city. Made me miss all my friends a bit more.

That weekend, I was staying with my friend Sarah, who I met earlier this year in January. You might recall (if you’re a loyal reader, I guess? I think I have like what, 7 of those?haha hello!) that she took me to see WNYC, where they produce some of my favourite podcasts like Radiolab, More Perfect and Freakonomics. I absolutely enjoyed staying with her because, like I said the last time, I feel like I’ve been friends with her for ages even though I’ve only kind of hung out with her 2-3 times. That first night I was there, I met her at the 42nd St subway stop and we were supposed to go to Brooklyn together but there was a power outage on Canal St that night so we ended up stopping at the next station for like 20-30 mins!! At the next station after that, we got stuck for a bit longer so Sarah and I were just like… ok, no way, we have to change trains. Everyone was just like running around trying to find an alternate route home. And it was so humid, we were all just like, totally drenched down there. It sounds awful, and it most definitely was, but it was also a hilarious bonding experience. Sarah kept apologizing to me on behalf of the city of New York and I was just like “meh, I’m young” LOL.

The next day, I had brunch with Iman, Keyan and Zohair. Keyan was visiting from Harvard, Zohair works in New York and Iman is at NYU Law. I felt so unbelievably happy to see my MSA friends again because they were really like an extended extended family for me at Penn. Really, I’d say it just felt super cosy to get together with them again. A few years ago, I thought I wouldn’t be able to see all my friends again after graduation so it really just feels so good to hang out with them post-school. 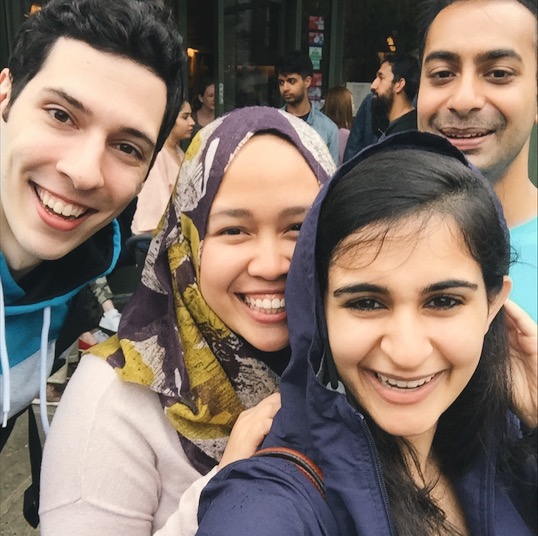 Keyan, me, Iman and Zo

After that, I went to the Glossier showroom!! I’ve been curious about Glossier for over a year now, ever since I heard Emily Weiss, Glossier founder, on a podcast. I’m a no-make-up kind of ~gal~ but lately, I’ve been a bit braver and rajin-er so I’ve really been trying out a no-make-up make-up look haha and Glossier is totally perfect for that but I was too scared to make the investment without trying stuff out first. I absolutely loved the Invisible Shield and Generation G lip stick/balm things buuuuut I guess they’re just going to have to wait for my birthday hehe. 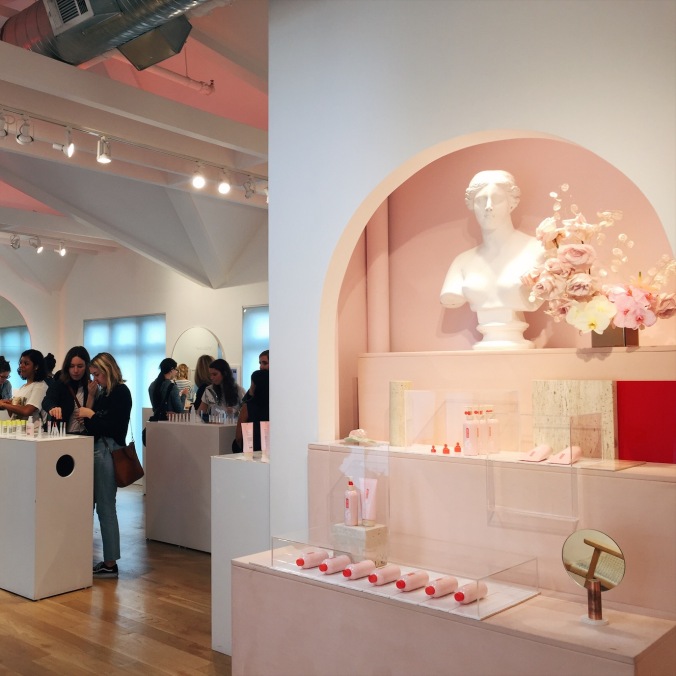 Stumbled upon this sign in Chinatown!!!! Made me miss home a lil bit more 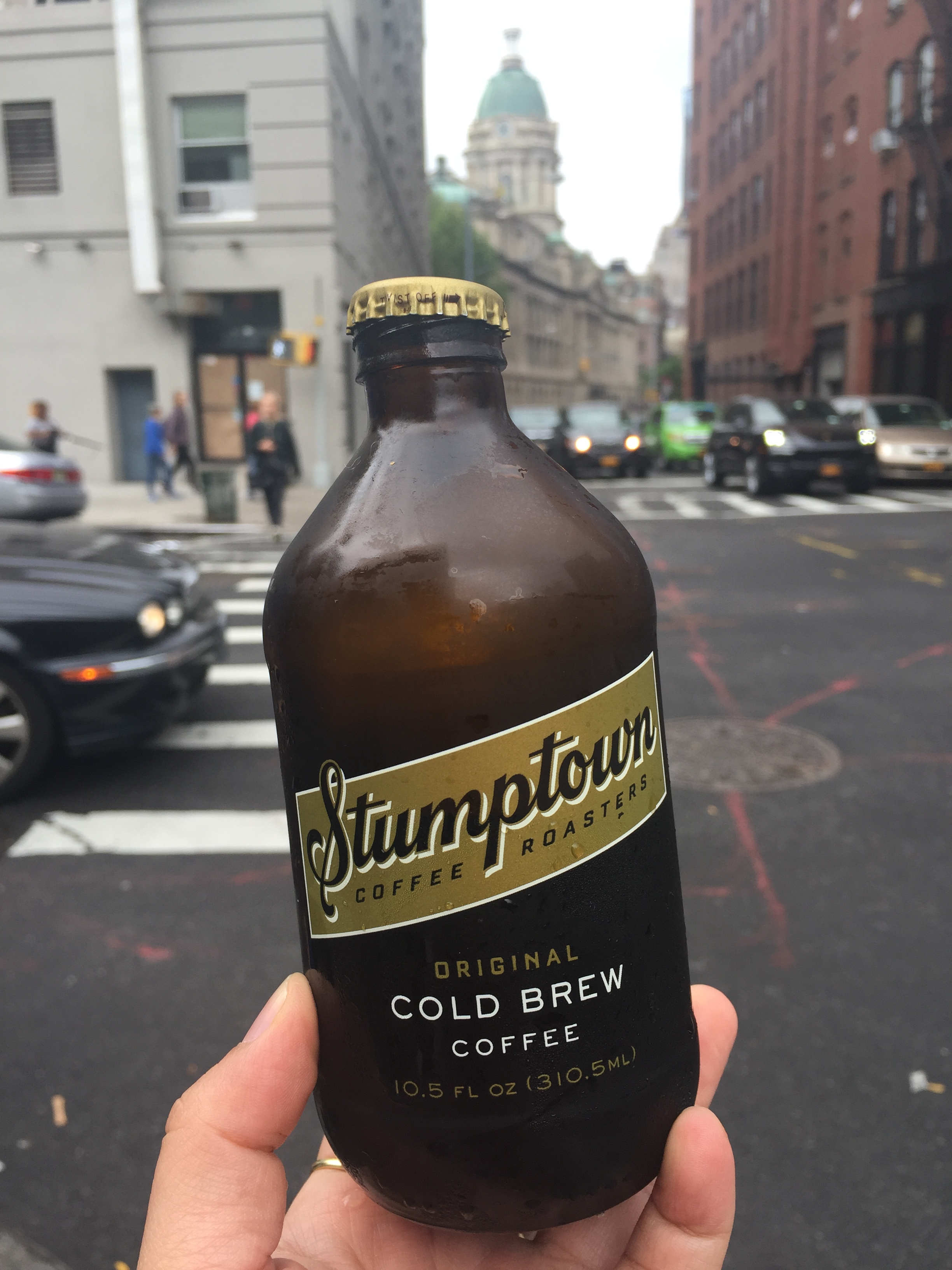 I was walking around after going to Glossier and stumbled upon an Outdoor Voices store and they were giving away free Stumptown cold brews!! 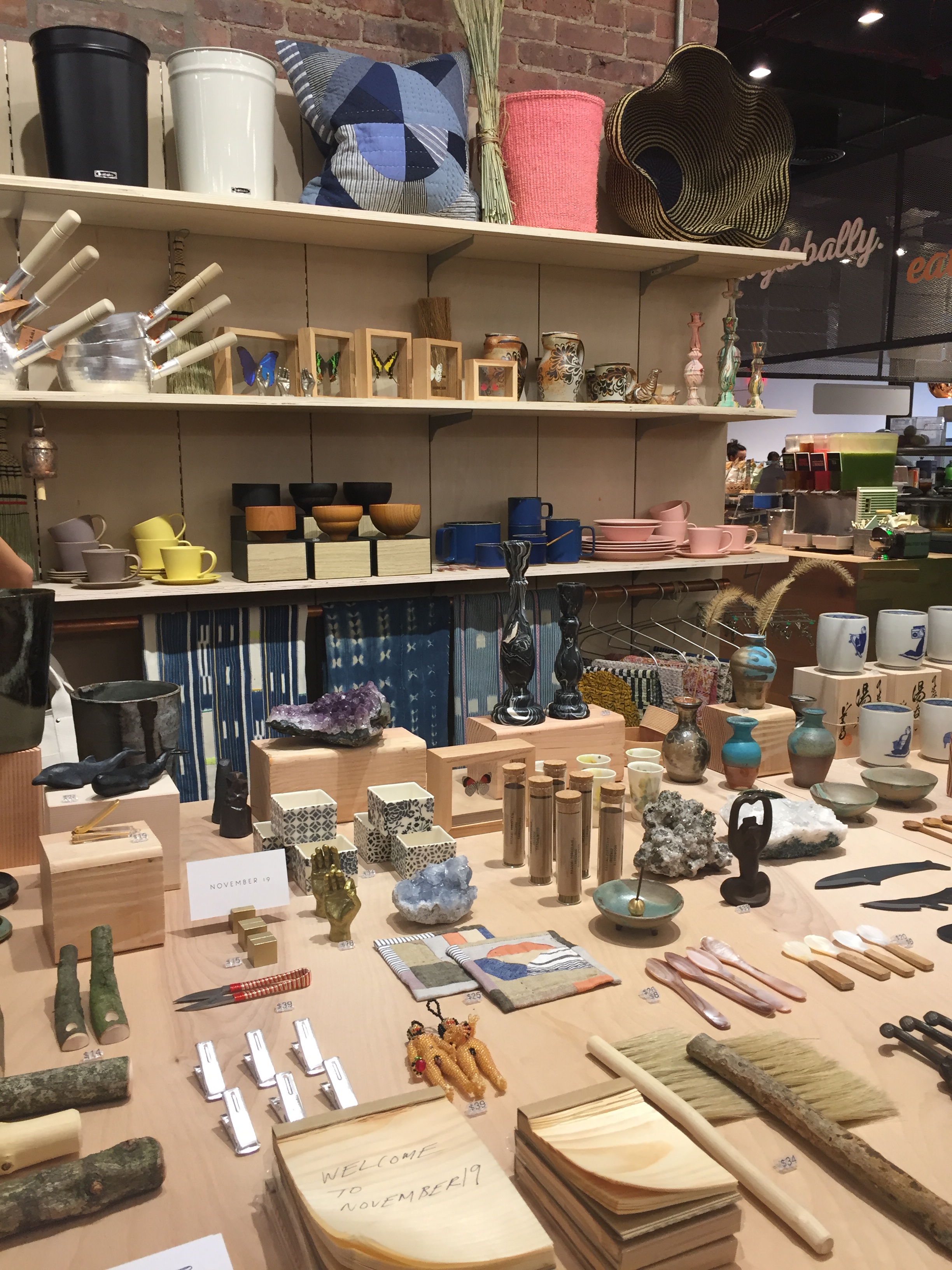 I also stumbled upon Canal St Market near Glossier and it was full of all these cute little bits and bobs—this is literally the best thing about New York, there are gems at every corner.

That evening, I went to Gong Cha and got my utmost fav winter melon bubble tea and caught up with my friend Andrew, who I worked with on a club called Sangam back at Penn. I really looked up to him in college and it was nice to see him again after over a year. We talked about growing up and stuff and it was just really nice to catch up. Sarah and I had dinner after that at this Malaysian restaurant and it was so absurdly mediocre but I still enjoyed it. Part of it, I think, was getting to speak Malay with the waitress haha. Since I don’t live with Shahirah anymore, I never speak Malay anymore and I had no idea that I kinda missed it. (Btw pa, if you decide to FaceTime me speaking bahasa baku, my reaction is going to be -_- because that’s such a lame dad jokey thing to do lol) 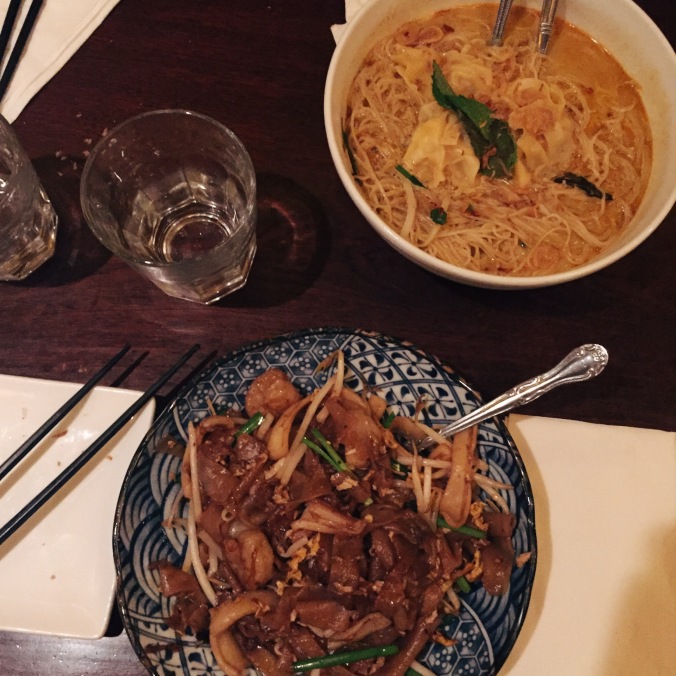 The best mediocrity I’ve ever experienced

Thankfully, the second night, Sarah and I had no problems on the MTA. We got back to Brooklyn in the perfectly decent amount of time. I hung out with her and her roommate/cousin and it was just a nice chilled night. I was honestly glad to stay in because the weather was so crap that whole time. It was most certainly crap the next morning as well. I got breakfast with fellow NPR intern, Alice that Monday morning in Brooklyn because she lived not far away from Sarah’s place. I weathered an awfully windy gloomy humid morning to meet her at this cute breakfast place (probably the most reasonably priced sit-down meal I’ve ever had in New York). I met Alice at the internship orientation thing last month and she’s working on probably the most successful NPR podcast, Planet Money so I was really interested to hear how she’s doing and what she’s learning and all of that.

Me and Alice in crappy weather

After breakfast, I just cleaned up at Sarah’s and made my way to Penn Station to head back to DC. I managed to snag one last New York goodie there—a slice of cake at Magnolia! Then I had to suffer through the 5-hour bus ride back. Let me just tell you, that I sometimes get car sick on a half an hour car ride so me being on long bus rides is always a….. story. I’m always equipped with Panadol, some vapour rub, some mints and snacks, a drink. It didn’t help that I sat close-ish to the bathroom, where the smell was… well, you know. Ugh. Could not sleep the entire time, either. And let me just add that I was already damp because I was stuck in a drizzle while waiting 45 minutes to board the bus. It is a TRUE WONDER how I did not get sick that week. But I made it back to my apartment and right after a good scrub, I made myself a good bowl of maggi kari and went to bed.

I honestly don’t think I wanna do many more weekend trips haha, wow, I guess I’m getting old. It’s just that, when you’re working, a weekend trip feels like you actually lose the weekend. You always feel like you need a holiday to recover from your holiday, you know? And I was just so tired that whole week! It wasn’t like in school where like if I arrived Sunday night, I could go to class on Monday from let’s say 10-3 and then just curl up in bed. I was actually debating going back to Philly for Homecoming in November but a) I don’t want to spend that money and b) I like spending the weekends resting these days because I’m officially old and boring. Just at this very moment, I got struck by a strong craving for a Hokkaido cheese tart. Sigh.

Anyway, as I was saying, I like spending weekends resting. This weekend was perfect. I slept in on Saturday, spent the afternoon doing my groceries and then had Jamie come visit me that evening for a night. I initially was going to write a short thing about New York and continue to write about Jamie’s visit but we’re at 1300+ words right now so I guess that’ll just have to wait! Haha. Be back soon! 🙂