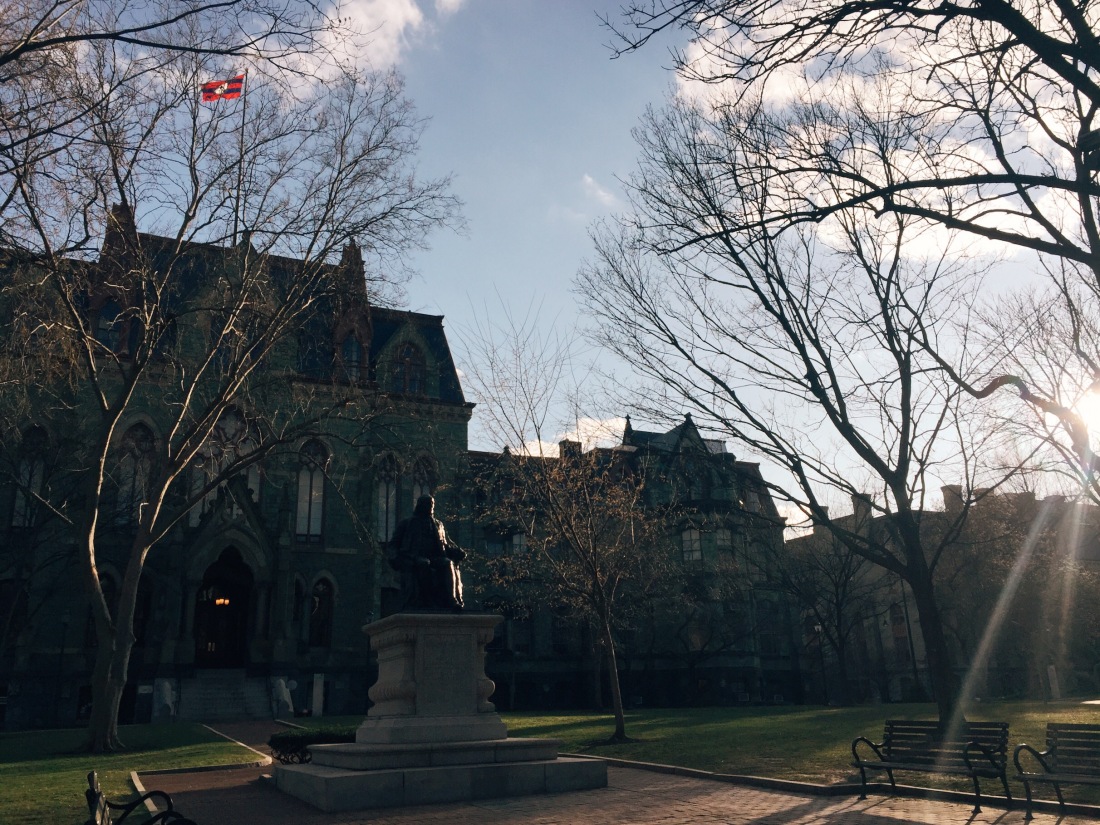 I had coffee recently with an alum named Alex, who asked me how it feels to be so close to the end of my college career. I think about this a lot—like, I can actually confidently say I think about it everyday—but I never really know what to say when someone asks.

In a way, I like it. I like that it’s coming to an end because I’m so tired. I’m not saying that the “real world” is easier than school because I know that you’re responsible for so much more once you start working etc (or at least, so I’ve been told), but the thing about being in college is that you are doing your job 24/7. I wake up in the morning even on weekends and I try to get to work as soon as possible. I am tempted to get into bed at 11.30 p.m. on a weekday and my mind sends out an internal alert that’s basically saying, “um, are you sure you can afford that?”. Working hours are so fluid, so boundaryless. If you’re writing an essay or studying for an exam, there’s always another sentence you can edit or another chapter you could go over again. There’s just no limit to how much you can work, especially when you LIVE on a campus and almost everywhere you look, people are working. Imagine living in your office with all your colleagues?! Anyway. I’m eager to get away from this pressure cooker of a place.

I also like the feeling of being almost done. It’s this silly thing that our human brains do where like, we see things differently the closer we are to it being finished. You know what I mean: graduation goggles. I now have all this premature nostalgia and it’s so interesting because it’s one thing to have nostalgia about a phase of your life that’s behind you, but it’s a whole other thing to feel nostalgic about something that hasn’t ended, because it’s this brief window of time when you get to live it and almost miss it at the same time. When Alex asked me how I felt, I told her it feels strange—there were all these things I had always known I should feel grateful for but still used to whine about, and now I’m suddenly talking about them like “Wow isn’t this great? This is amazing. Look at this bitter cold, it’s wonderful. I have a midterm next week, how exciting!”

Okay, obviously that was a slight exaggeration. But yeah, I walk down Walnut on my way to class every day and in my mind I’m like, “thanks, Philly; thanks for hosting me these past few years”. Most (if not all) of my freshman-year wide-eyed wonder dissipated without notice a long time ago. I no longer walk through any corner of campus feeling the need to look around, no more “what building is this?”, no more “oh, that’s where that road leads to”. All that freshness has gone, only to be replaced by a sense of familiarity and comfort. But this premature nostalgia, these “graduation goggles” have resurrected my freshman-year eyesight to some extent. For the first time in a long time, I’m seeing Van Pelt library as a brilliant resource instead of just referring to it as a place that smells like socks and feels like fatigue. For the first time in a long time, I’m trying to go to as many events as I can instead of mindlessly skimming through Facebook event invites. It’s nice.

But of course, I can’t ignore the undercurrent of impending grief that powers my nostalgia. I have said this repeatedly, but soon, I won’t live within a 1-mile radius of all my friends. My friends are not going to come over at a moment’s notice at midnight to hang out with me until we can no longer hold up our eyelids. Soon, I won’t be handed dense readings about everything from economics to pop culture and be pushed to read and discuss them. I won’t be invited to hear people like Joe Biden and Malcolm Gladwell speak anymore. That… sucks.

It especially sucks because even though I know I’ve gotten a lot out of Penn—events, speakers, classes, leadership roles, mentors—I don’t see how I’m any better because of it. So, part of me just isn’t ready to leave. It’s like going to the petrol station with a malfunctioning gas indicator and feeling like you can’t leave yet even though you have to because you don’t think your tank is full yet. Does that make sense? Do you know what I mean? I don’t think I’ve gotten enough skills yet, or become smart enough yet. I could still become so much sharper, so much more polished.

Seriously though, I know I’ve mentioned this before but my fear of stagnation runs so deep. I worry that I’ve laboured over all these college courses—without quite knowing how they will someday benefit me—only to settle in a crappy office job where I don’t feel like I’m learning and growing. I am fully aware that I risk sounding like the typical whining millennial but say what you want, I genuinely worry that I’ve worked so hard only for it to not matter, for it to not amount to anything more than to act as a bit of glimmer on an otherwise-dull resume.

I’ve been thinking about this lately, and I think part of what’s driving this specific feeling is the fact that I’m probably not heading to some high-paying, prestigious job. I feel like the culture at Penn is such that a significant fraction of my graduating class will head to finance and consulting jobs so having other jobs can make you feel like you’re “underachieving”, even if going to Wall Street is the last thing you want. But there is a certain rigor, or at least, a perception of an intellectual rigor that is associated with finance and consulting jobs that I feel like I will be missing out on. I mean, I have to stress that I don’t think other jobs are easy, but the culture at large definitely treats it that way; whether or not you believe it yourself, the belief slowly seeps through your skin and gets to you.

One thought on “Graduation Goggles?”