I usually wait until the end of the week to blog but when your week starts out so strong, sometimes you just can’t resist pulling up that blank page on a Monday night.

Ken, Hui Jie and I are in Astronomy together which is kinda fun and kinda not. It’s not fun because I find phases of the moon super difficult to visualise and understand. It’s fun because I get to go through it with my friends—classes are always more fun with friends. Ken got a basketball, some chopsticks and a lamp to act as a makeshift solar system model (basketball was the earth, chopsticks were the earth’s axis and the lamp was the sun). We did our homework. It wasn’t easy. We had to explain why the U.S. experiences winter when Australia is going through summer and had to resist the temptation to say “BECAUSE IT JUST IS?!?!?”. It’s funny how you sometimes can’t explain the things you’ve taken for granted. 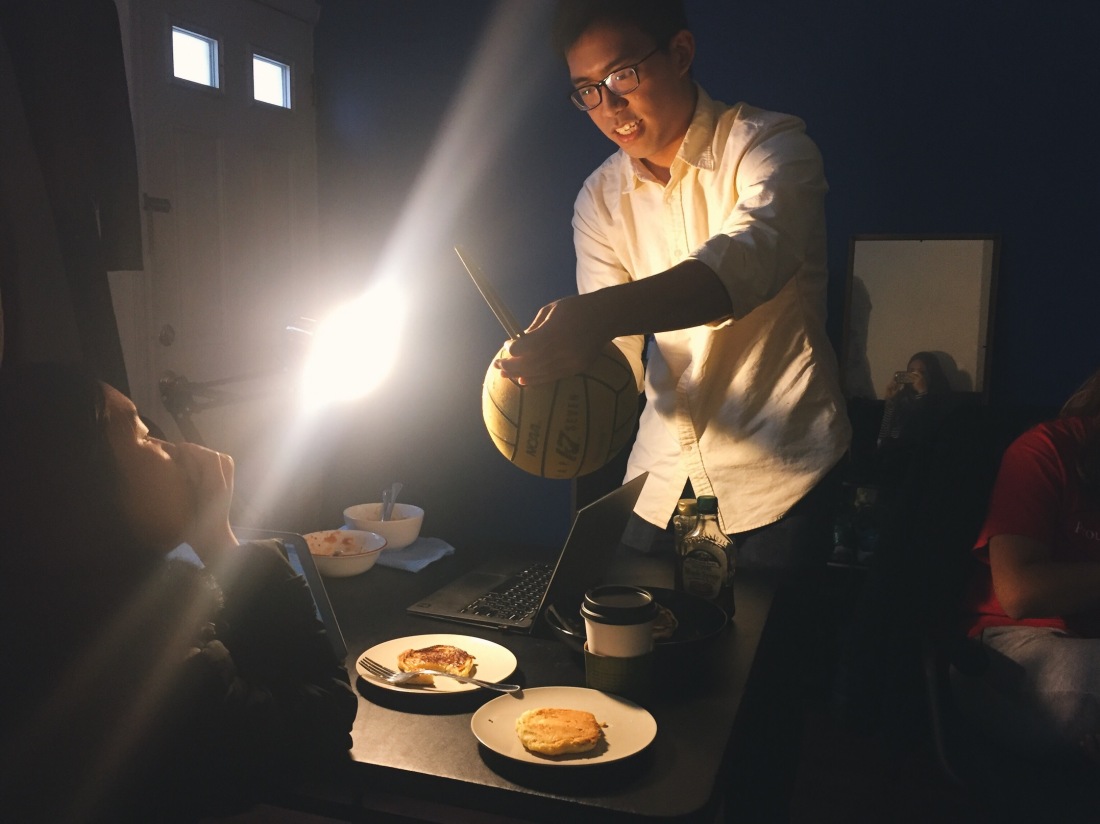 They ate some of the ricotta pancakes I made. It feels nice to have people eat the food I make. We sang along to The Last Five Years (one of my fav movies of all time) and dissected Jamie and Cathy’s relationship experiences for parts we found relatable so that was fun. It reminded me of lazy Sunday evenings in my aunty’s living room in Klang with my cousins. I guess these people are kind of like my family now.

Speaking of family, my friends Lisa and Nate are currently in Malaysia as Fulbright Scholars and they’ve both hung out with my family recently. That just makes me so happy and I can’t quite explain why? I like that Lisa and Nate are getting a little taste of my life back home just as I’ve somewhat had a feel for their lives here. I like that my friends are spending time with my parents/aunt. I just like it, it gives me good vibes all around. I hope they’re having a good time and are enjoying my homeland hehe.

Anyway. I had a really good day today as well. I woke up early to go for Professor Pollack’s International Political Economy lecture. I’ve already taken IPE with him so I know it seems strange that I’m attending his classes again but I honestly don’t think I can get bored listening to him explain about Bretton Woods and the Gold Standard and the shift towards Keynesian economics. It feels like re-watching your favourite movie, you know? I can’t wait for the part where he talks about Dispute Settlement in the WTO and the Asian Financial Crisis!!!

After class, I did some reading (still reading The Art of Memoir by Mary Karr) and then Hui Jie and I went to the city for Restaurant Week. Restaurant Week is basically when restaurants offer a selected range of items from their menu for a fixed (cheaper) price so people usually go to try places they wouldn’t otherwise be able to afford. Our birthdays are less than a month apart and since we both weren’t together for our birthdays, I liked today because this was kind like our belated pseudo-celebration. The weather was horrid today and I usually hate getting wet socks on rainy days but I had such a nice time that I didn’t mind. 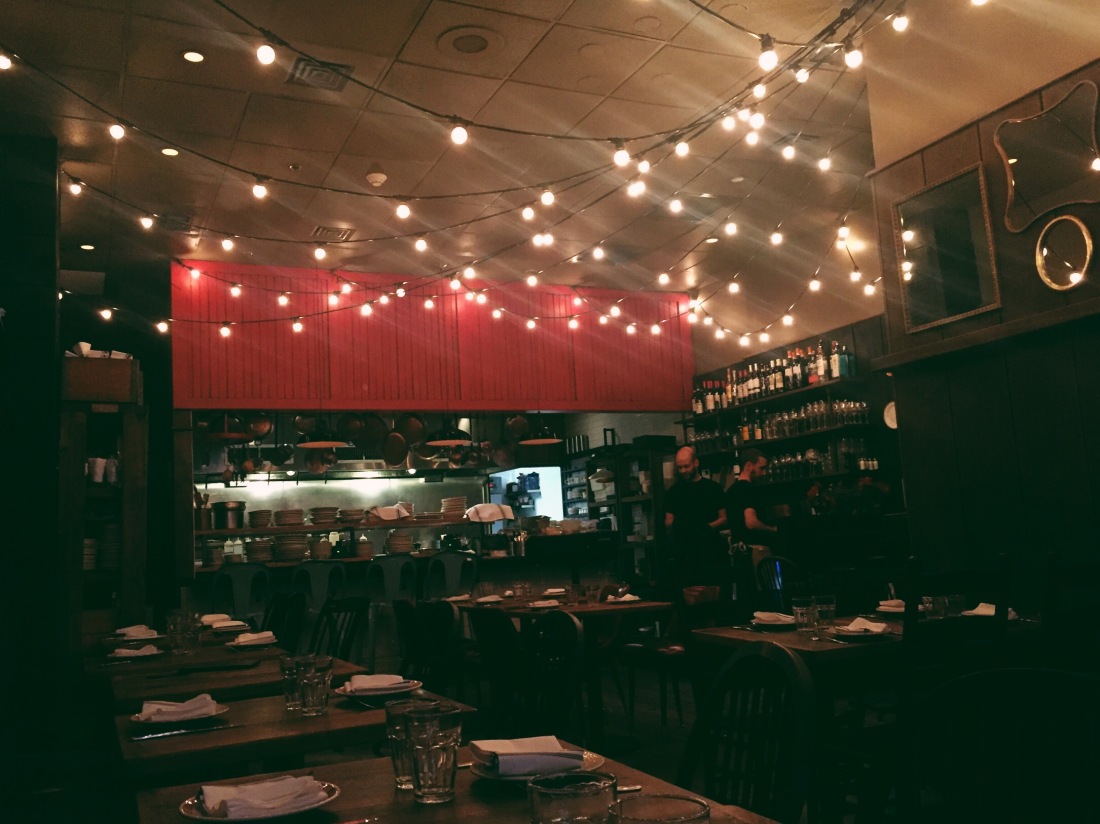 I just got back from Jamie’s. She was telling me about her New York trip while I did some work. I really wanna take a moment here to express how much I appreciate this girl. People always credit their friends for being good listeners but I love Jamie for coming to me to tell me about things, whether it’s the trivial stuff like finding a Chobani Cafe or a sale she’s excited about to the more serious ones that she trusts me with. It means so, so much to me.

It was the best Monday to have after a great weekend. I went for a morning run, cooked shakshuka, got a white chocolate peppermint drink and binge-watched series 1 of The Missing (watch the trailer!). It was so good. Zoe and Alfie (the vloggers, haha, my guiltiest pleasure) kept recommending it and when I saw that they only had 8 episodes I was like, “eh why not?” and oh my god it was so intense but so riveting. I saw a review that described it as “watching an insect slowly suffocate in a jar” though so maybe it’s not for everyone lol. But I think they say that because the shots are beautiful but the plot line is, again, intense and also emotionally taxing (it’s a show about a missing child, after all).

And while we’re on the note of pop culture/media stuff, might I recommend a few podcast episodes. On the Media, a podcast about media (like how the media covers/does not cover issues, how people react to media etc) ran a series called “Busted: The Poverty Myths” where they explore how poverty has been treated in the media, myths about poverty, and etc. It is just super informative and humanising—I highly recommend it. I also have been following The Truth for a while, but have only recently listened to their episodes. I listened to the one called “Dark End of the Mall” and it honestly blew my mind in a way I didn’t know audio shows could. They’re a fiction show, and their episodes are not serialised so you can listen to any one of them. I’ve only heard a few but I feel like “Dark End of the Mall” stood out as being above the rest. I also love Planet Money and this past week I’ve listened to “Jubilee! (?)” (Iceland “forgiving debts” of some of their citizens), “The Kansas Experiment” (aftermath of a Kansas senator dramatically lowering taxes) and “Don’t Believe the Hype” (about why people hate the Dow). I think some/all of these were reruns of old episodes but Planet Money is full of gold episodes so it’s always worth a listen.

Ok I thought I was going to write about some of the cooking recipes I’ve played with this past week but I’ve gone overboard with this post once again—maybe I should just dedicate a whole new category for weekly cooking posts lol. I just don’t think I’d be able to keep up with that! I don’t know. Maybe I’ll try it out soon.