It’s been a week since I came back to Malaysia (although, as I’m writing this, I’m in Thailand on holiday… but you get the picture). This means, last Friday, I had to say goodbye to my beloved little off-campus apartment in Philadelphia.

Apartment 427, Chestnut Hall was probably my favourite part about Penn. I guess technically it isn’t part of Penn, but I loved coming back everyday to this little space that felt like mine. I loved staying off-campus because I could “unplug” after a long day. I loved having some place I could just coop myself up for a whole weekend and not be bothered by the hustle and bustle of the campus. I loved that I knew where everything was kept. I loved that I kind of… “created” that space with Shahirah.

I still remember very clearly that first day in August 2014 when we moved in. I even remember that I wore my grey Gap long sleeves and my floral uniqlo pants which I love wearing on flights. Sha and I were picked up from the airport by Aunty Lina and right after dropping our bags at the apartment, we headed straight to IKEA. We were so sleepy from jet lag but we had to buy everything because the apartment came completely empty. That evening after we came back from IKEA, Sha kind of just passed out on the living room floor amidst boxes, unassembled furniture and sprawled out suitcases. I remember leaving her a note that said I was going to Sweetgreen to buy food, lol. That first night, all we did was rummage for some blankets, “unroll” our mattresses (because you know, those IKEA mattresses come in a tight roll?!) and slept among all that mess. 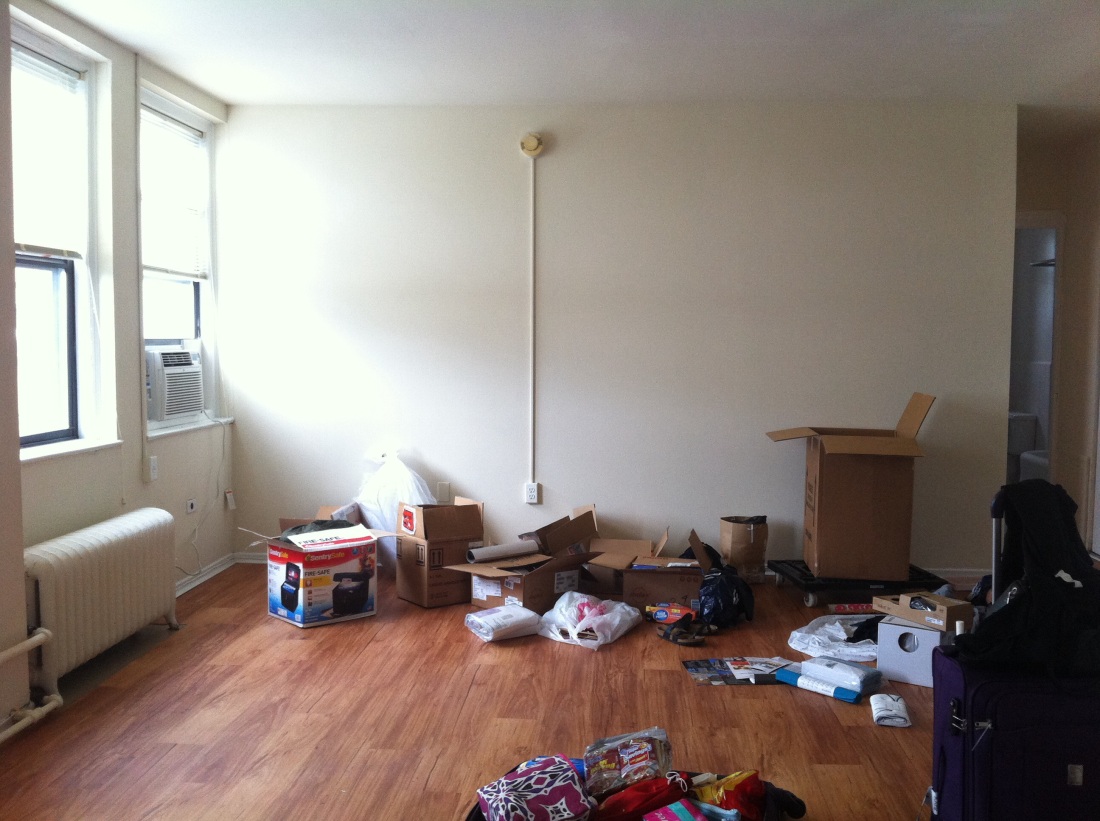 We definitely had a lot of good times there. One of my favourite memories was probably our housewarming party, which I kinda talked about last week. I still can’t believe we ever pulled off something that successful.

Every year subsequent year, when we came back for school, I’d always say the one thing that helps me readjust is having a living arrangement which was constant. It was this one physical thing that I didn’t have to sort out every year, unlike our schedules or the storage + move-in nightmare that people who lived in dorms had to deal with every fall. It was also nice to see the place kind of… “grow” with us over time, if that makes sense.

We started out sharing the one bedroom and having a living room but later decided it was best to convert the living room into a “bedroom”, which I took and loved. It was a small space demarcated with foldable screens and then some curtains. It was modest but had everything I needed.

I guess you can say I loved it here because I really came into my own here. I enjoyed taking care of my own place and deciding what goes where and what should be done when. I think the right word for it is authority. I had some authority here and it was quite liberating.

Moving out of this apartment was a long process… My roommate Shahirah had already moved out about a month before, so I was a little apprehensive about clearing everything out on my own. Slowly, I sold things on Craigslist, threw things out, and donated a lot of things that were still good for use. I want to say it was hard to let go of everything… I mean, it was a little sad and definitely very tiring (my body became so sore from all the moving and cleaning), but I was kept busy coordinating furniture pick-ups and the whole process was pretty gradual so it wasn’t too bad. Still, I miss that apartment so much. It’s strange—I’d sometimes recall a memory and see my room and kitchen so clearly in my mind but then remember that all of that doesn’t exist anymore, you know?

By the last night, all I still had was my chair, my bed frame and mattress, my curtains and a few random bits and bobs which the maintenance guy in the building said he’d help me take care of. I really tried to clear out as much as possible so as not to trouble him too much but Hanna came to help me move out on Wednesday because she has a car, and I could only donate whatever I was ready to clear out by that day.

By Thursday, it was really totally empty. I would hear echoes in the room, which was so strange. 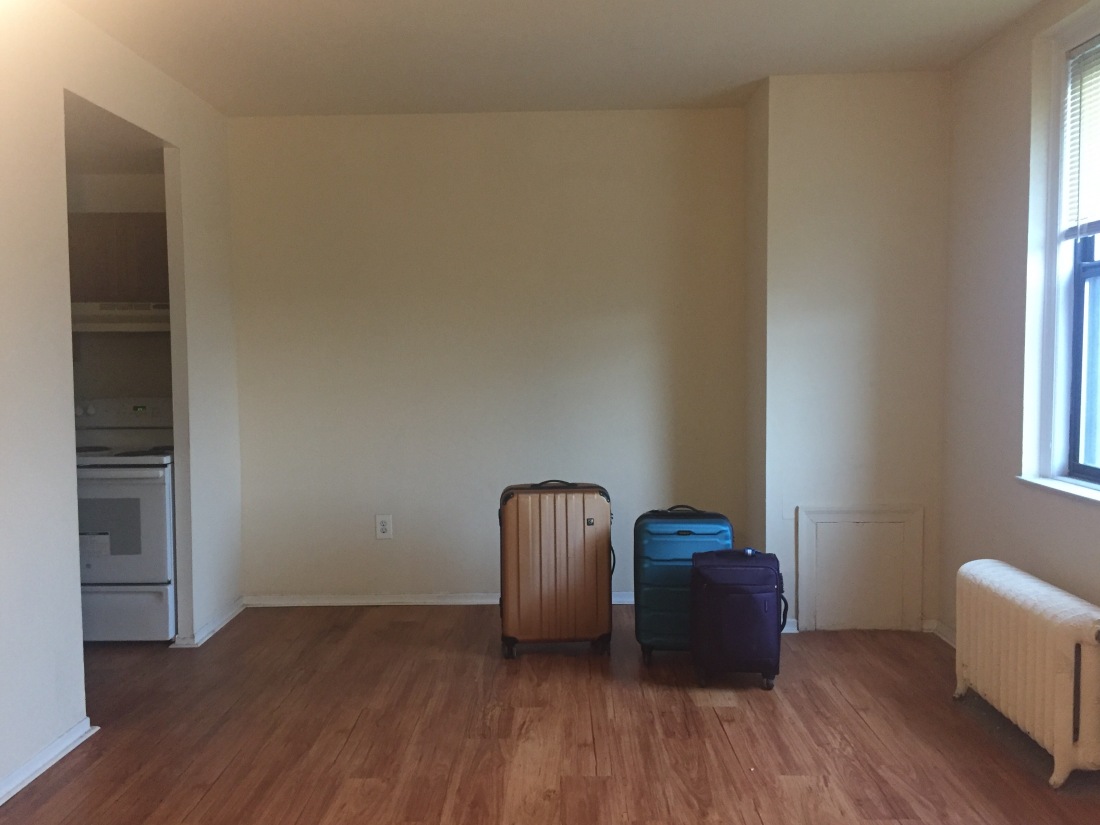 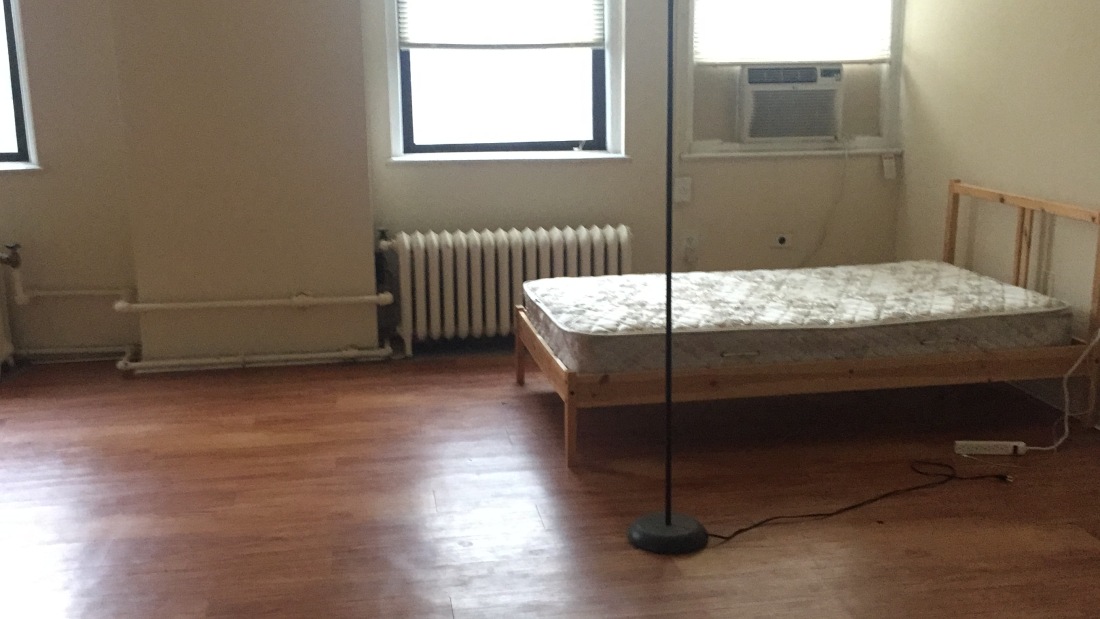 So yeah, again, I’ve had a lot of good times here. A lot of late nights studying and movie marathons and friends over and baking adventures. That room felt more like my room than my room at home does now. My room at home is lavender and has pictures of people I don’t speak to anymore and even has the Twilight books on my shelf—a far cry from what my room at Chestnut Hall was. Which means now I don’t really feel like I have a place that feels like me. I suppose that’s just what happens in your 20s; all this flux…

All I’m left with now is a lot of pictures in my phone of things I had to take one last snap of before I chucked or sent home… house slippers, Pyrex containers, baking tray, exam papers, candles, post-it notes, take-out bags (yes! take out bags!), an umbrella, photos taken down from the wall, carpets. Each and everyone has its own montage of a story attached to it and I would’ve hung on to everything if I could. I don’t know why I do that, but I guess I’m just one of those “memory box” people. You know, the kind of person who keeps little bits and bobs like ticket stubs and boarding passes and wrapping paper. When I try to think about it logically, I can’t make sense of this tendency of mine. Keeping all of these things doesn’t make the memory more real and doesn’t help me relive it. Maybe I’m scared I’ll forget if I don’t keep the physical things. Maybe I do it for the nice little burst of nostalgia I’d give my future self once she has forgotten. Maybe I don’t want to come to terms with how easy it might be to forget if I don’t keep physical reminders. I don’t know. 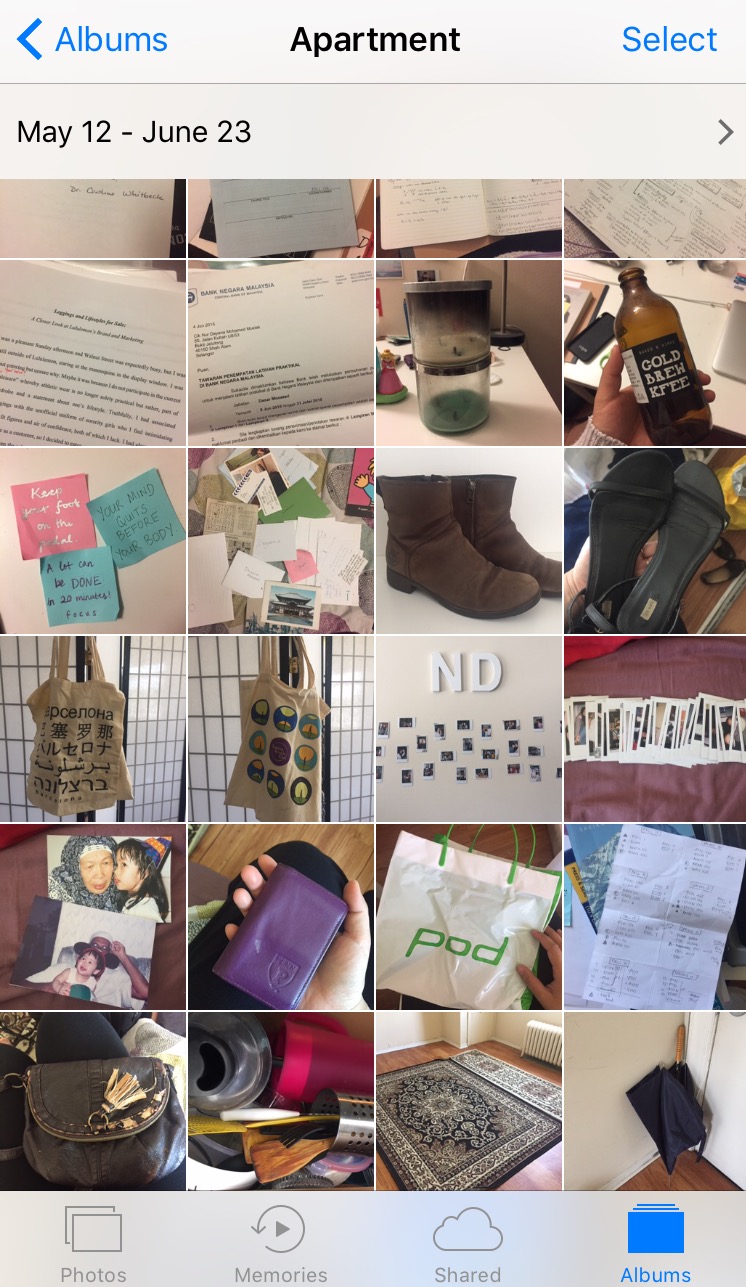 Lately though, every time I think about why I hold on to these things so much, I remember a line in a spoken word poem one of my friends, Nate, once recited: “Suddenly you are sitting 30,000 feet above an ocean, 9000 miles from home where the air is thinner but it’s curiously easier to breathe in, and in that moment you realise that the best things you brought with you are weightless.”

I will always be thankful for that little space that was mine and Sha’s. Maybe you don’t quite “exist” anymore, but you will always live in my mind, weightlessly. Goodbye, 427. Thanks for everything.