It’s my first summer without a real job and you know, for a while I kind of regretted taking on an internship the summer after my freshman year because honestly freshmen should just chill. But (!) it has been a month being done with classes now, and let me just say… this whole ~lounging around~ life doesn’t seem to be for me as much as I thought it would be. I did love those weekends I didn’t have homework to do and I loved sneaking in some free time to play Sporcle quizzes or watch Netflix. Strangely, free time isn’t as fun when you have so much of it. I literally haven’t felt like playing Sporcle since finals ended. ECON 001, everyone: scarcity!

Regardless, all this free time has meant I’ve gotten to do some of the Philly things I’ve always wanted to do. For example, I went to the Philadelphia Museum of Art for the first time! Let me tell you why this is noteworthy for a second. First, the PMA is only about a 10-minute drive away; I have cycled and ran past it several times. Secondly, most Penn kids make it to this museum within the first few days of being here because during orientation, there’s this party Penn throws for the freshmen at the PMA—Shahirah and I just didn’t go! Third, even my family has been to the PMA almost 4 years ago now.

So yeah, I went to the museum! It was cool, but also somewhat… underwhelming, to be honest. To be fair, (and this is going to sound so very bougie) in the past six months, I’ve gotten to visit The Met, The British Museum, LACMA, The Louisiana Museum of Modern Art in Copenhagen, The Chicago Institute of Art and The Barnes Foundation… so the PMA kinda paled in comparison. Still, I really enjoyed going to museums. I don’t get to do these kinds of things when I’m back in Malaysia because there just aren’t good museums around (fun fact: I used to think I wanted to go into museum curation for a hot second) so I just appreciate being able to take a short ride to see such a legit collection.

The only downer was the fact that the Rocky statue was like closed off for construction! But oh well, I will live. And for those of you who may not know, the Philly Art Museum is home to the “Rocky Steps”. I haven’t even seen the Rocky films, so, whatever.

I also got to go to the Barnes last Sunday and I preferred that a lot more. I had been wanting to visit The Barnes Foundation for almost a year now. Last Fall, I took a Communications class called Critical Approach to Pop Culture and it was the first time I learned about The Barnes’ history. I mean, I don’t want to bore you too much but basically, Barnes was this rich guy who collected a lot of art and it used to all be held in this mansion in the suburbs of Philadelphia. It was a really unique place because while most museums organised artwork by period or style or both, Barnes didn’t. He was more interested in pushing visitors to seek more transcendent connections between the artworks. The paintings at The Barnes don’t have printed-out labels on the walls next to them, just the name of the painting’s artist on its frame. And the fact that it’s a foundation and not a museum was a testament to how Barnes thought art should be accessible and teachable to everyone. He intended for it to all be kept in the old mansion. Then he died, and there was this huge scandal about moving the foundation to the super touristy part of Philadelphia. The debate was complex: it was about honouring a person’s will, whether or not it would be better for public education, protests from the old location’s neighbours because there were so many tourists in their housing area and of course, political and financial interests. 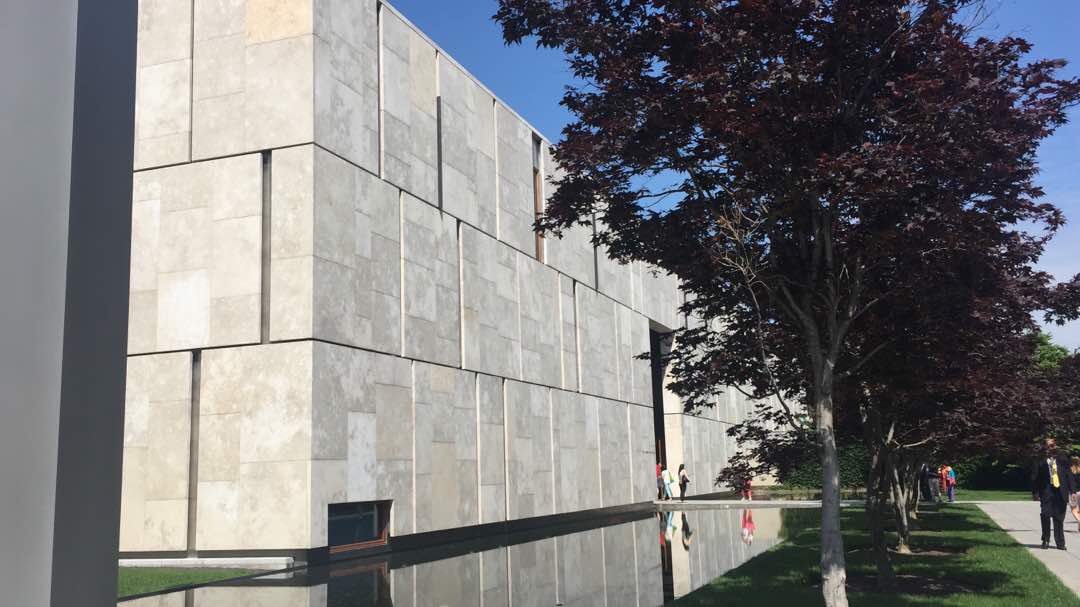 So that whole long rambly paragraph was just to say that I’ve been really curious about The Barnes because I knew what an interesting history it had. (I’ve said enough about it and I don’t know if anyone ever clicks on the links I include, but I highly recommend these two articles: The Barnes Foundations’ Disastrous New Home and Moving Pictures) The place itself was beautiful, although, as these articles note, it’s not what Barnes himself intended: it’s too “nice” to the visitor, when the intended experience was for you to be thrown into art “like diving into the deep end of the pool”.

We weren’t allowed to take pictures inside, but I was very amazed at how they attempted to recreate the interiors of the mansion, down to the wallpaper and lighting. I was also very curious and wish I could have learned more about why the artworks were arranged the way they were; there was definitely a lot of symmetry and intentional juxtaposition but honestly, apart from how much I liked the way they look, I couldn’t think too much about it. My recent visit to both The Barnes and PMA did, however, send me back to my notes and readings from my Modernist Literature class two years ago. I’m happy to say that I appreciated reading Gertrude Stein’s writings about Cézanne and Picasso so much more now that I’m not as much of the loser I was in Sophomore year.

Okay, I truly don’t know much about art so I’m going to stop talking about museums now. My highlight of the week has been getting to spend time with my friends (as always). It was my friend Hanna’s birthday last Friday but I only got to celebrate it with her on Monday. We went out for iftar together, with Fahmida, Menvekeh, my sister Julia and Hanna’s friend from med school, Omar. We ate at this really good Afghan restaurant I had never been to and I’m sad that I don’t know when I’ll ever get to go back there.

It was super nice to see a bunch of my friends and for some reason everything seemed so funny to me that night. I can’t remember too much about why I kept laughing, but this was definitely the most unforgettable moment from that dinner: I was telling Omar about how my sister is studying medicine in London, and how that means I have someone I can always send weird pictures of my throat or whatever to ask about whether I’m okay. The thing is, I had sent the same picture of my throat to Hanna the night before and unbeknownst to me, Hanna had also sent that picture to Omar to discuss it for whatever reason. So, when I told him that I sent those kinds of pictures to my sister, Omar said “oh, so you’re the throat picture!” I wanted to burst out laughing but I also kind of couldn’t believe that here was this guy I was meeting for the first time……. and he has literally already seen my uvula. I just turned to Hanna and said “we need to talk.” LOL. 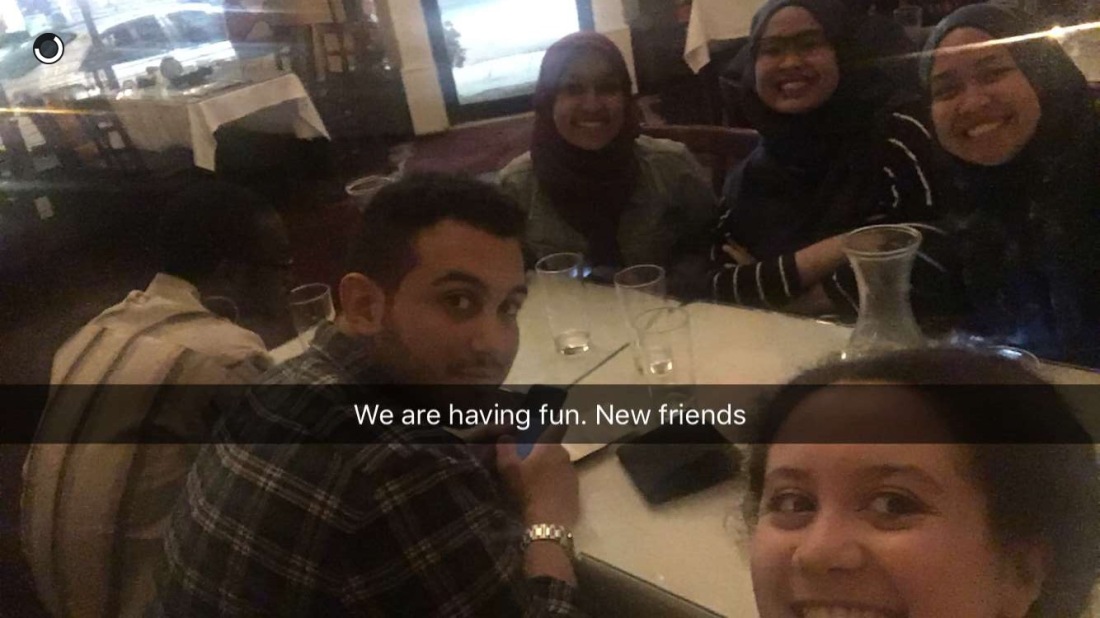 Apart from other hanging out with people who’re here for the summer, I also got to see my friend Hui Jie yesterday. She was coming back to Philly for a night after a cruise in the caribbean and she flew off to Singapore earlier this morning. We got our usual pizza for one last time except last night, we had to sit on the floor of my apartment since I had already, to her dismay, sold my couch (which she has a particularly good relationship with). I’m glad I got to see her and I’m hoping I’ll see her again in KL over the summer before she goes off to the Netherlands for grad school. I’m reallyyyyy going to miss hanging out with her all. the. damn. time. and getting to know the most granular details of her day to day life—the kind you only get to know about people when you see them almost everyday.

So yeah, my days have been pretty chill. I’ve been doing a lot of reading (currently reading The Road to Character by David Brooks) and catching up on my favourite podcasts; it is truly a first world problem of mine that I am unable to read and listen to podcasts at the same time, sigh. I’ve been listening to a lot of Radiolab recently, and if you’re new to podcasts then take this as me firmly grabbing you by the shoulders, looking at you squarely in the eyes and telling you: listen to Radiolab. I think they’re formally a podcast about science but in reality, it’s really about curiosity and exploring interesting questions through the lens of a dynamic character. They’re so amazing at sound design and storytelling that you always feel gripped by each episode and if you don’t know where to start, here are some of my favs:

I tried to list like 2 of my favourite Radiolab episodes but I just couldn’t, haha. Apart from Radiolab, I started listening to Tape and Longform—both are shows that feature interviews with writers, journalists and editors I look up to like Ira Glass, Charles Duhigg, Alex Blumberg, Malcolm Gladwell, Anna Sale, Lulu Miller, Stephen Dubner and so many more. I can’t even tell you how happy and inspired I get whenever I hear people talk about a) whatever they love doing plus how they got there and b) the thinking and overall process behind producing their craft. Ugh. I also caught up on other favourites like Reply All and Planet Money, which really bring me so much joy. I just have such a deep love for podcasts because they use compelling storytelling to help you think and ask questions and they’re just so, so, so informative. I rarely ever finish listening to a podcast without feeling like I just became a teeny little bit more of an informed citizen of the world. Anyway, clearly, if you ever want to talk about your favourite podcasts or if you want recommendations, just don’t even think twice about reaching out to me. I can probably talk for hours about this stuff.

I know I started out saying I don’t know if this whole chill life is really for me, but I’m glad I’ve kind of found a way to keep it interesting for myself. Saffa (and honestly, so many other people) have reminded me to try to really rest and enjoy what I’ve got because the truth is, I don’t know if I’ll ever get the time to be this relaxed ever again. I’ve been thinking about that a lot: this stark transition from being really busy to having so much to rest and I might say more about that once I’ve more fully wrapped my head around how I’m taking it (or I might not, lol). But after probably failing to relish the joy of being in college as much as I should have, I think I’m going to try to take her advice on this one and savour all this free time.

Until next week, thank you for reading!