I always knew it would happen, but having it all actually happen felt both very emotional and anti-climactic at the same time. Two Mondays ago (because I owe you a blog post from that week) I went for my last Barre class at Pottruck (our gym) with the instructor, Diane. As we were about to leave, I said my goodbyes and almost teared up and lost my words but thankfully for the power of social norms/conventions, I didn’t. I did my usual thing where I asked for a picture and she obliged and just like that, I don’t know when I’ll ever see her again. 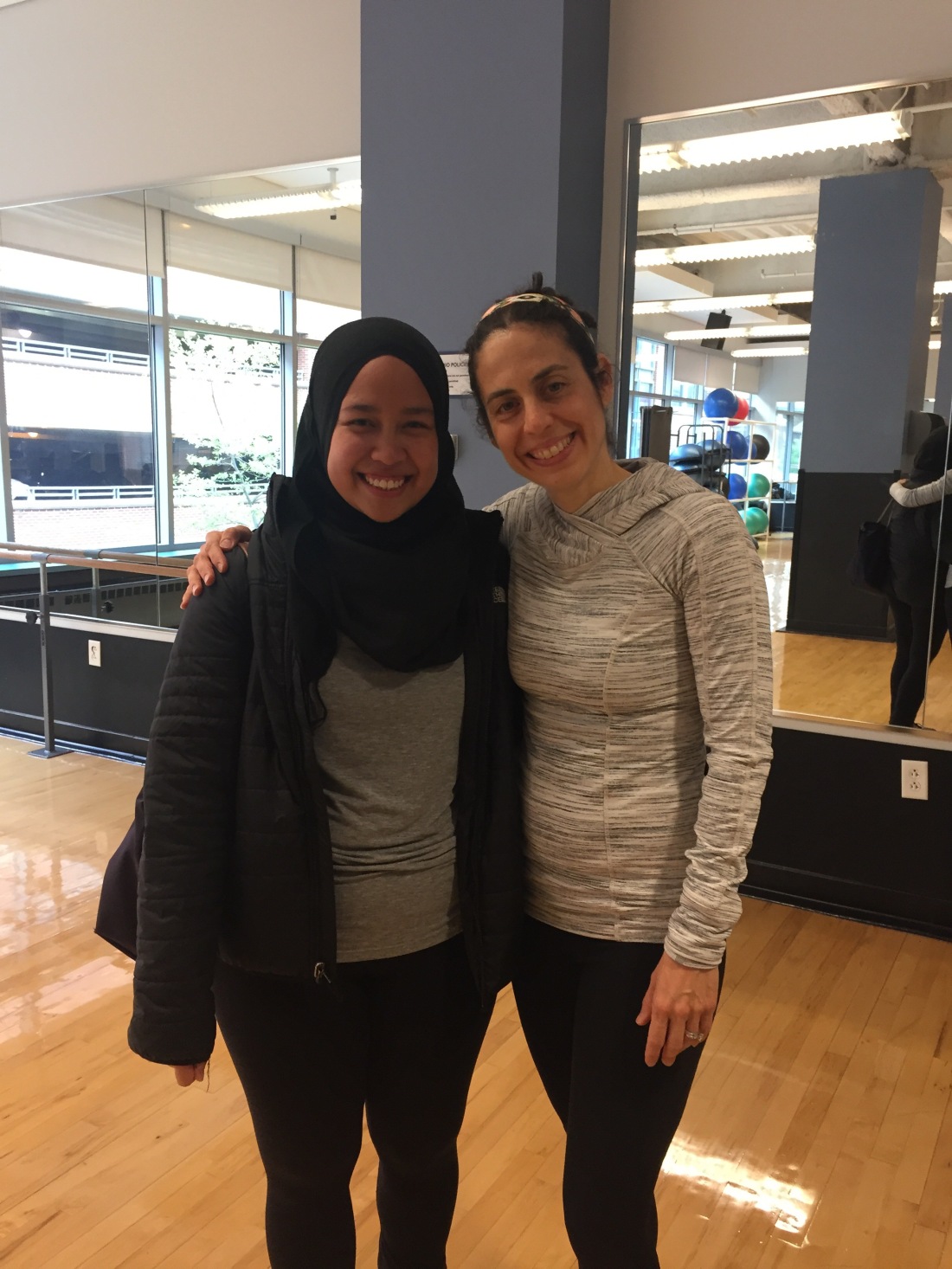 The entire week was full of lasts. I had my last class on Tuesday, it was Astronomy. Look, I know I’ve not had the best relationship with this class—in fact, when he posted a poll about how we felt about the class, this is how I answered.

I kinda wanted to answer the first option but the poll wasn’t anonymous, hahaha. So anyway, yeah, I didn’t love it but it was good for me. I learned so much. The seasons are not caused by varying distances from the sun. Spacetime was not a thing invented by Hollywood. We only ever see one side of the moon. I walked out of DRL that day and was like, wow I’m done. But at the same time… I didn’t quite have the time to feel that way because immediately, I was thrown into finals season. So honestly, it did not feel like anything major. It was more like… just another semester.

The thing that made me most feel sad was having my last post-Astronomy lunch with Ken and Hui Jie. I made us play some Sporcle geography quizzes at lunch just to make it extra special too, hehe. But the rest of the week was just back to work. I had a poster presentation thing with the Psychology department where you have to present what you’ve been doing research on, and all the faculty will come talk to you and ask you questions. I have to admit, my poster printing was a pretty last minute situation… so much so that I was kinda working on it at other events and stuff right up to the very minute I had to print it. But it all turned out okay. I stood in front of my poster for 2 hours. Ken and Hui Jie turned up to support me! 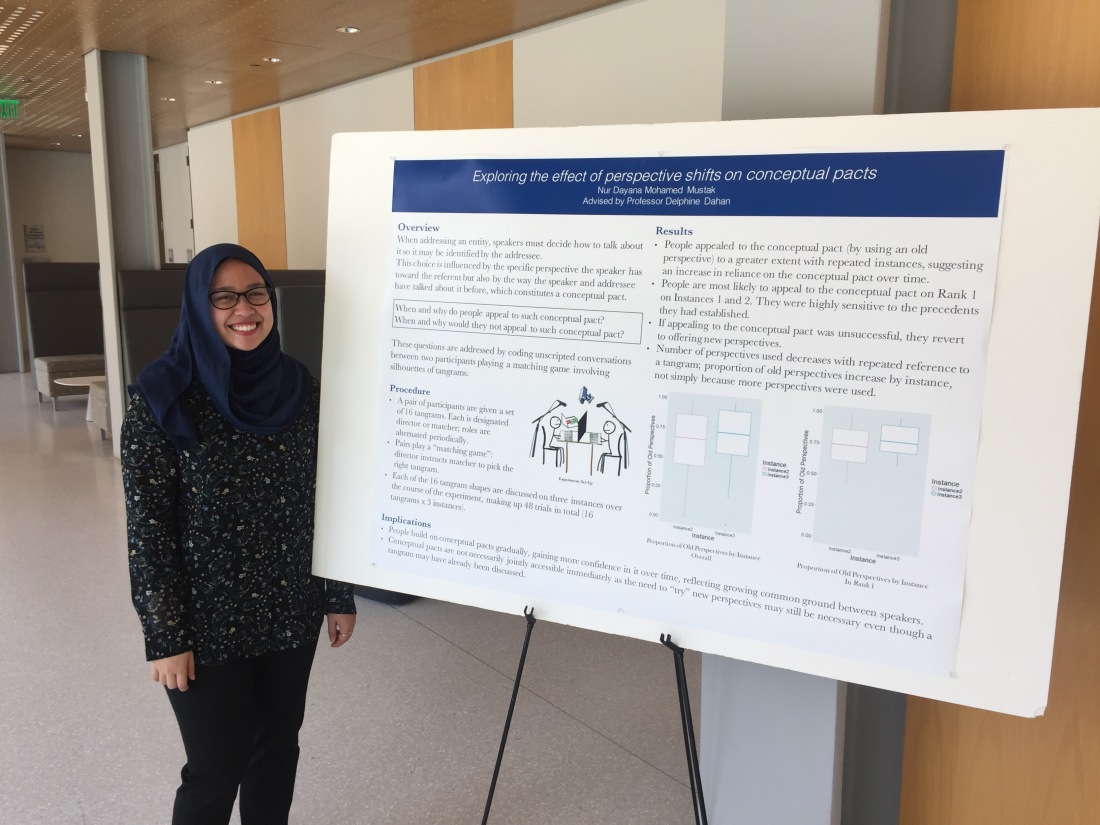 Thinking back now, that day was so annoyingly hectic. I had to meet my research advisor to just go over what to put on my poster again, but I could only stay 20 mins because I had to go to Adam Grant and Sheryl Sandberg’s Authors@Wharton event, which I ended up being a little late to and having to leave early because I wanted to attend the Pan Asian American Community House (PAACH) end of year celebration… which I also had to leave early because it would’ve ended at 8-ish and I had to book my poster printing appointment with the printer at 7. It really annoys me whenever I know I’m not really being present at any one place, and that’s one thing I’m glad to move on from right now.

Besides the rushing around though, it was a good day. Sheryl Sandberg’s talk thing was so good. Seriously. I cried almost throughout the entire thing. She was talking about her new book with Wharton professor Adam Grant, which is all about grief and how we deal with it. She lost her husband two years ago and this book was born out of that experience. 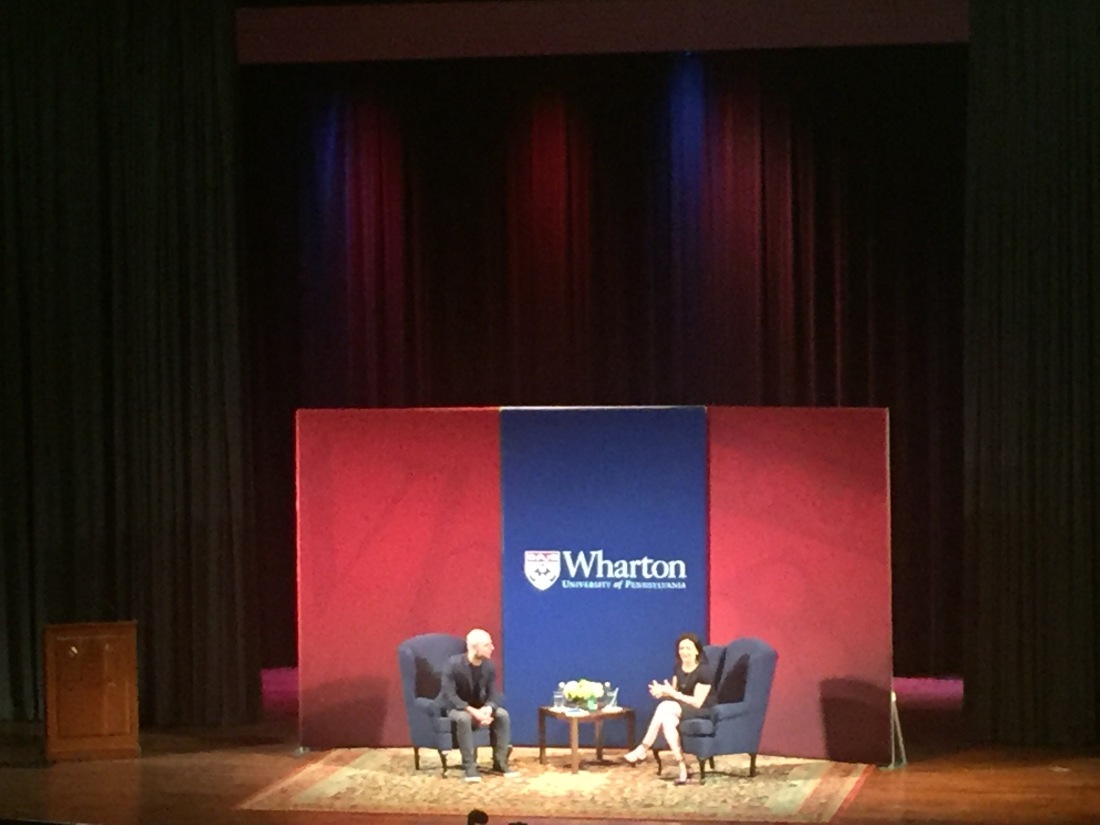 Sandberg talked about how we tend to not ask how people are doing anymore if it’s not the first time we’ve seen them since a traumatic/heartbreaking incident happened because we are afraid we will “remind them” of it. She made a very good point, which is that we can’t remind anyone they lost their husband. They already know that, and are probably thinking about it constantly. She also talked about how it’s more useful for us to say “there’s this thing I can do to help you” when we’re trying to support someone as opposed to “let me know if there’s anything I can do to help” because the latter puts the onus on the person who is hurting to figure things out. I thought that was really powerful.

She also pointed out links between grief and confidence: when she got back to work after losing her husband, she felt like she was not at her best at all. And it made her feel like “great, I lost my husband now I’m going to lose my job too”. According to her, what helps during this time is pointing out little things that the person who’s hurting usually doesn’t need complimenting on in order to build back their confidence. I just really related to all of that so much and I think it was all such useful advice. I’m very excited to read Option B this summer.

Then, Thursday and Friday (and the rest of the weekend) were reading days, which are essentially days off for you to study before finals but people end up using them to have farewell events etc. I had two that weekend, one with Malaysians at Penn and the other with the Muslim Students Association.

The MAP senior sendoff was fun because it was really yummy Malaysian food at this place called Sate Kampar in South Philly. The MSA one was also really fun because we were such a huge group and it was nice to see all the MSA seniors together. They gave us superlatives (I got “most likely to go viral” LOL) and sweet little cards at the end of the night and I was so moved. Honestly, these two communities have been a huge part of making me feel at home at Penn and I’m sad to “leave” it but I know they were always part of the process of supporting us as we go on to bigger and better things. 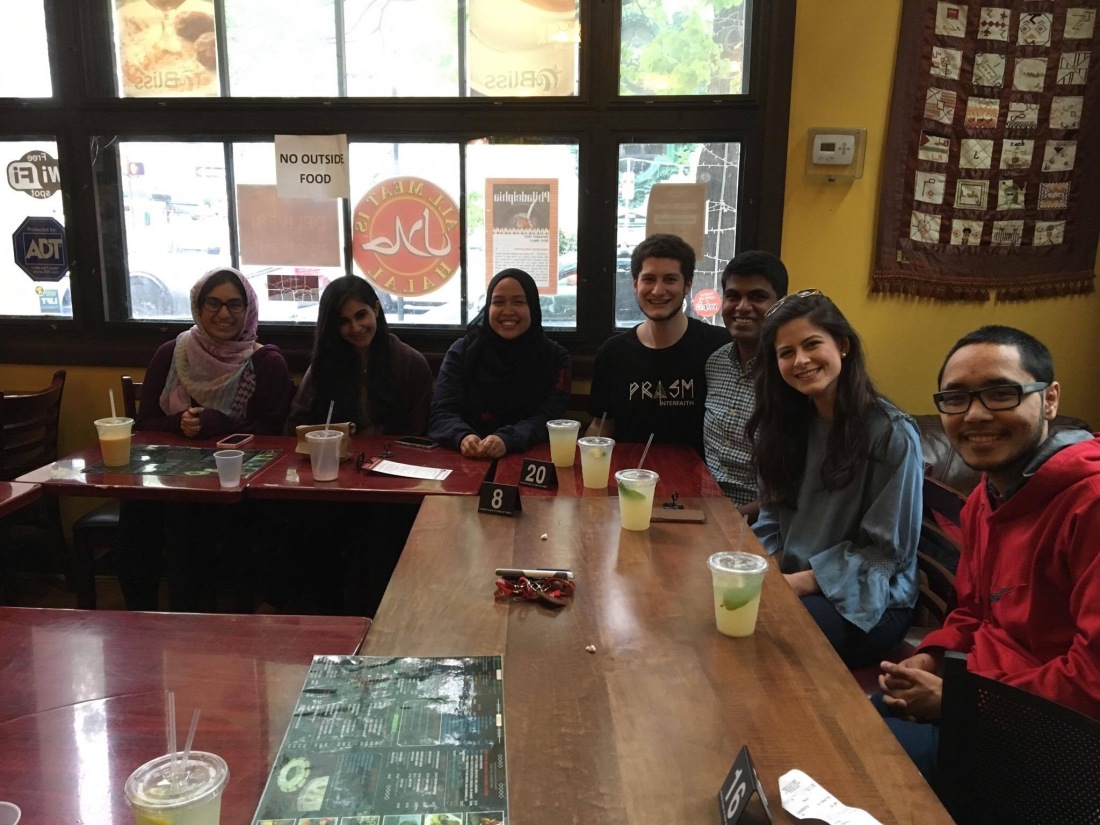 Fun fact: MSA senior send off was initially supposed to be at this Indian restaurant called Sitar which made me so excited because at the time I found out, I had been craving it for ages. I think I was almost going to go to Sitar on the day they told me about the dinner but when they said it would be held there I decided to wait. PLOT TWIST. The afternoon before the event, they changed the location to Manakeesh. I went to Sitar for lunch immediately.

The rest of the weekend was dedicated to poring over the Astronomy textbook. I hadn’t been doing a good job of keeping up with the material so it really was like binge-watching a tv show except, it was binge-reading a textbook. I was actually quite nervous about how much I didn’t know so those few days were intense. I did little else other than eat sleep and read that textbook. The exam on Tuesday actually turned out pretty well considering how (not) prepared I was! I was very happy with how I did and was glad to be done with the class. So there. This blog can say goodbye to me complaining about that class now.

I spent the rest of the evening after the exam hardcore chilling. Professor Connolly took all her TAs out to thank us for the semester so that was fun—I have loved getting to know her over the past year more as a person, beyond the classroom. Then Cristina came over to my place and we made broccoli and cheddar soup for dinner. I have to say, it was pretty good. I spent the rest of the night catching up on the past season of The Big Bang Theory (oops, guess I wasn’t really done with Astronomy then). 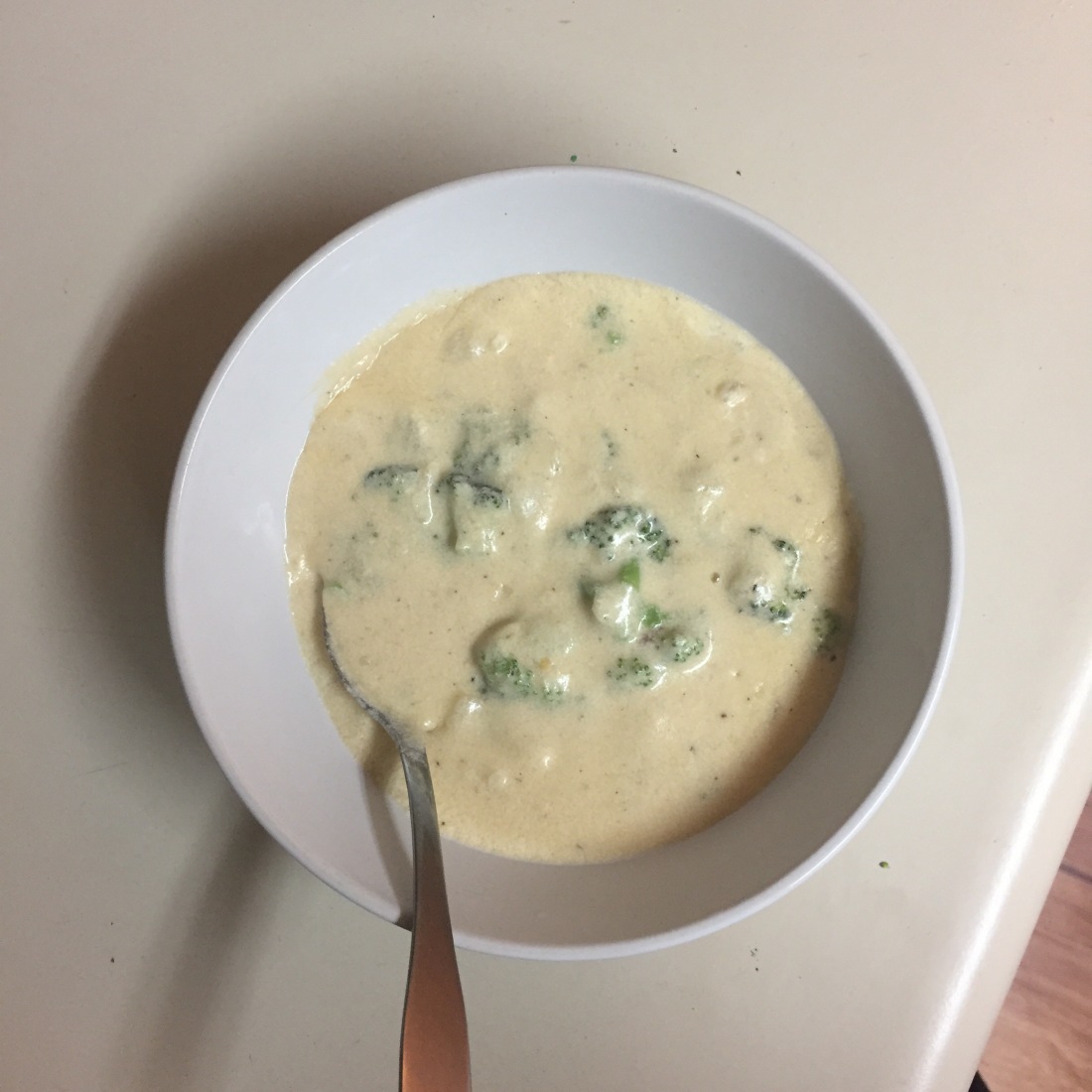 The rest of my finals were relatively chill. I had to write a paper about my research (which I had already written half of) and take an exam for my Psychology class (which was based on only the last few weeks of material and was open book). I took my Psychology final on Thursday evening (though I ended up forgetting the book!) then came back to write the rest of that research paper thing.

The next morning—let me warn you, this story is about to take a turn but I promise I’ll bring it back—I woke up, watched a YouTube video about how to make the best grilled cheese sandwich and got out of bed to go make it. I switched the light on and I saw something spread out on the kitchen counter. I wondered, “huh, what did I spill?!” before I realised, to my utter heartbreak and terror, that my bread had been chewed through from the side, through the plastic by a RAT!!!!!!!!!!! I mean I didn’t actually see it but what else could it be?!

I was so scared I couldn’t go back in there. I told Shahirah about it then texted my family about the scene I had just witnessed. My sister laughed about the fact that I called it a “scene” so in order to justify my word choice, I marched back into the kitchen to take a picture. AND I SAW IT, GUYS!!! I SAW THE LITTLE CREATURE. I screamed sooooooo louddddd and just start shaking and burst into spontaenous tears.

Naturally, I just packed up my stuff and left to go to Starbucks. Hey, don’t judge. I had a paper to write still (told you I’d bring it back to the paper). So yeah, I spent the rest of my morning terrified but powering through, proof reading my paper and editing last bits. It was due at 5. By about 2, I was really done and was just staring at it. That was it. It was over. I still had to print it out and submit it to the department but… I was done. I’m now a “graduate”, even though I feel no different at all.

After putting it off enough, I went to print and submit it. Then I just sat in the lobby of the psychology building for a bit…. feeling… I really don’t know what I was feeling. It felt like I was suspended in air. Floating. Cut loose from gravity or whatever. It was just me in a chair, awkwardly looking around. No confetti, no smarter than I was the day before. It was strange. 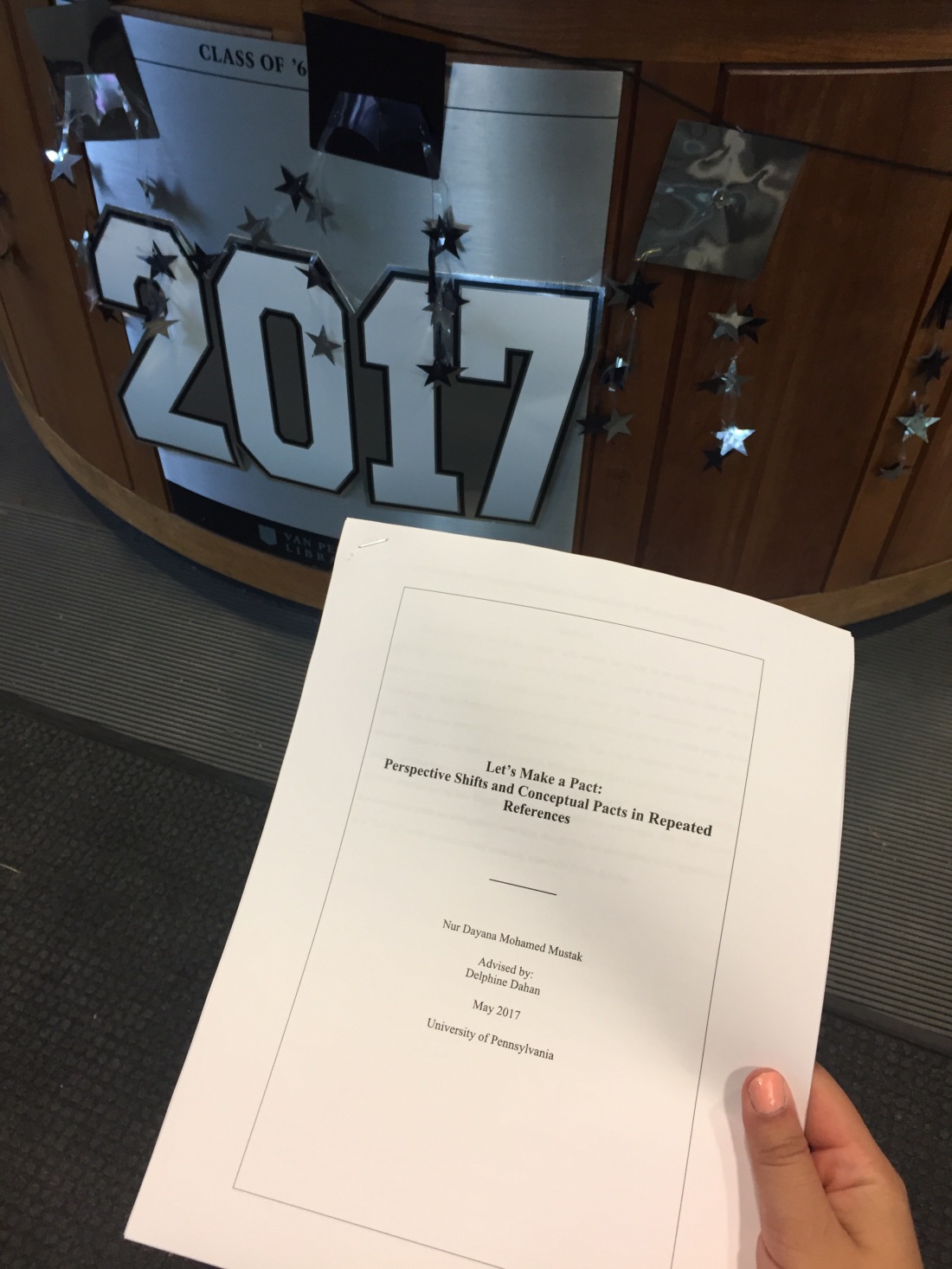 Because I didn’t want to linger and that feeling of weirdness, I got bubble tea and went to Ken and Hui Jie’s to hang out. We spent hours…. I can’t even remember what we were doing but I know it ended with us playing Sporcle for a few hours. I love those two, and I love Sporcle. So. Much. In that moment, I really just wanted to pause time and soak up the feeling. It’ll never really be like that again, just spontaneously hanging out at someone’s place for 7 hours, ending up playing geography quizzes. I loved it. But then that ended too, because we were all heading out on little holidays in the morning but as of midnight that night, had not even started packing.

Hui Jie and I are in Chicago right now (she’s asleep next to me as I type this all out on my phone because I didn’t want to bring my laptop). Ken, May May, Peter and Selina are in Tennessee. Shahirah is with Fahmida in Seattle. We’ll all be back for commencement ceremonies and all of that soon but, just like that, ~college~ is over.