Good morning! I’ve just done something really silly. I was making a cheese quiche for lunch later while I was drinking some tea. I grabbed some pepper to put in the quiche batter and I think you know where this is going… I put it in my tea instead, haha. It’s actually not bad. I ended up drinking it in the end. I’m now coughing a little but it’s okay!

Haha, anyway… I had such a good week. The first few days of it were rough. Two words: astronomy midterm. Let me put this into perspective for you. The first astronomy midterm (which I tanked) covered only chapters 1-5. This exam covered up to chapter 14 so there was a lot more material and it was less calculation and more facts/memorisation which is good because I’m better at memorizing than calculation, honestly, but it was also not good because it just takes so much more time to study for. So yeah, I spent a huge majority of my waking hours studying for this exam. It went ok I think! And that was my last midterm ever—I have no exams left until my final finals!

Studying for astronomy with my bowl of quinoa goreng (i.e. nasi goreng but with quinoa because I had no beras lol)

(By the way, last week I got a comment about how I only ever talk about Astronomy with regards to my classes and I laughed so hard at that because I realised that too and didn’t think anyone would pick up on it. It’s true though! I do talk about Astronomy more than anything else because I’m only taking 3 classes this semester and the other two are so so so chill that Astronomy is just proportionally huge lol.)

I also got to go to some cool events!! I love that I’ve been having more time to go to events this semester because I’m not taking so many classes. I think at Penn, everyone is so busy organising their own events that they don’t really get to attend any other events which is such a shame; it’s like everyone’s talking and no one’s listening.

There was an event last Thursday, it was “an engaging conversation” between our university president, Amy Gutmann and former Vice President Joe Biden. Biden is spending his post-political career at Penn at the brand new Penn Biden Center of Diplomacy and Global Engagement. He talked about reaching across the aisle, his faith in the American people, etc. It was kinda cool to see him live in person! Tickets were free but you had to register really quickly in order to get one and I was the only person I knew who had tickets so I went alone. The funny thing is (!) I ended up sitting next to someone else who also went alone and was also about to take the same Astronomy midterm later that day! Haha. While we waited for Biden, we were both talking about Mercury’s lack of atmosphere. Very nerdy, I know.

He couldn’t talk for long while sitting down haha

On Friday, Hui Jie and I went to the Fels Institute of Government’s event, a conversation on media and politics with NPR reporters, Scott Detrow and Sam Sanders. They were so cool, I loved the stories they told. Scott talked about how one of his favourite stories he did was about these Northern Pennsylvanian rattlesnake wranglers. Sam talked about how he got pretty close to Bernie Sanders after covering him through the campaign trail and how he learned that Bernie really loves crowds. They were at one point both hosts of the NPR Politics podcast (Sam has now left), so they also talked about how people tend to expect them to always talk about politics and to have an opinion about everything in politics. They said that they always get flak on Twitter if they tweet about something non-political. Sam said “people want us to be more than we can be for them because they like us and they feel like they know us.” It was really interesting. I mostly love how clear it was that they loved their jobs. Ahhh. It was so, so, so cool.

The mic stand kinda ruins the picture but whatever.

I also went out for brunch with my friend Cristina in the city Friday morning. It has been a while I think since I last went out for a good sweet brunch. We went to Green Eggs, which is this really popular spot in the city. It was raining and a weekday morning so we thought it would’ve been fine but I still had to wait in line outside in the rain for over 20 minutes before getting a table! But wow, was it worth it. I hadn’t been there since early on in junior year and I forgot how good the food is there. I had pecan french toast and Cristi got raspberry french toast. I could hardly eat for the rest of the day because I was so full but so satisfied. 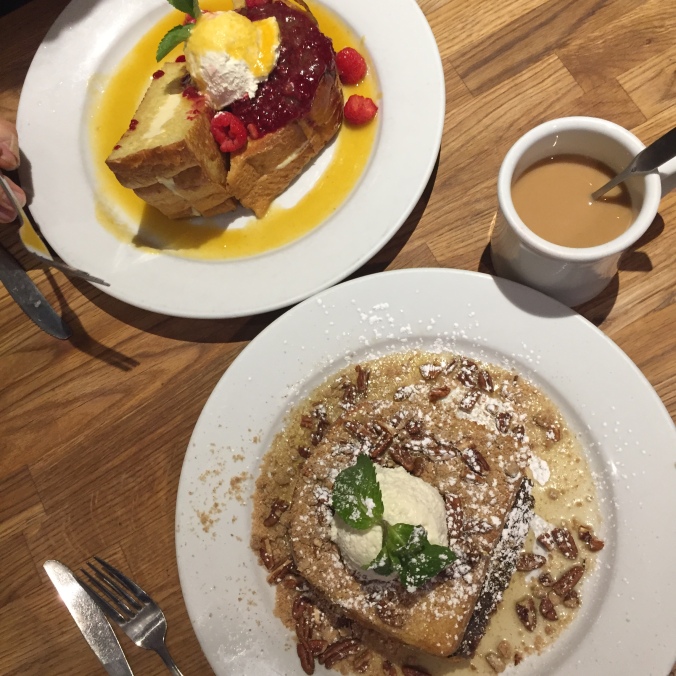 Later that night, my friend May May and I went to see the Onda Latina show. It’s a salsa fusion dance group and Cristina is in it!! I also know a couple of other people in it and it’s always just so much fun to see how talented my fellow Penn students are. I’ve said this before I think, but I just love putting aside all feelings of competitiveness and just supporting and admiring how amazing everyone here is. 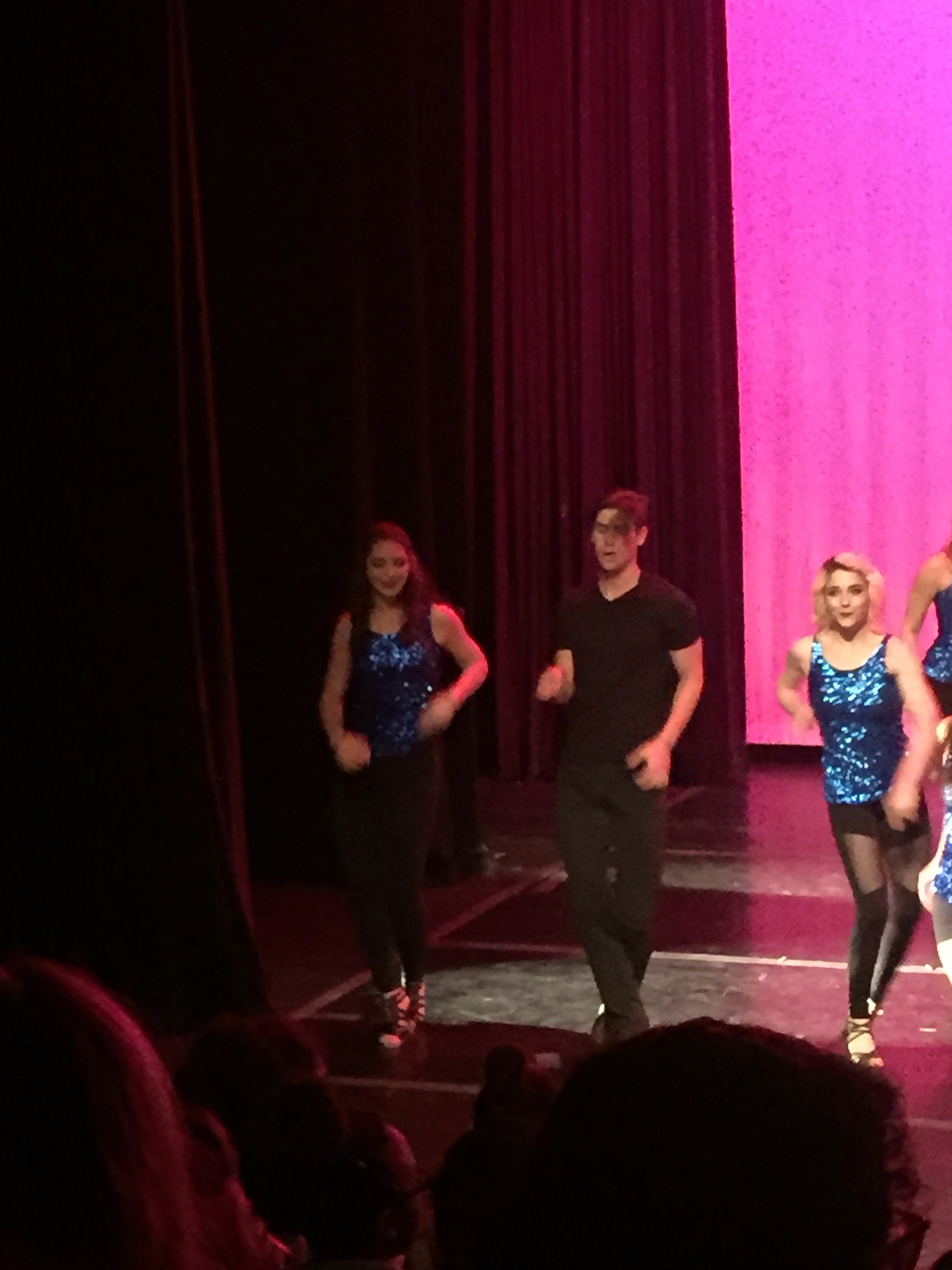 ok I know it’s crappy quality but there’s my friend! 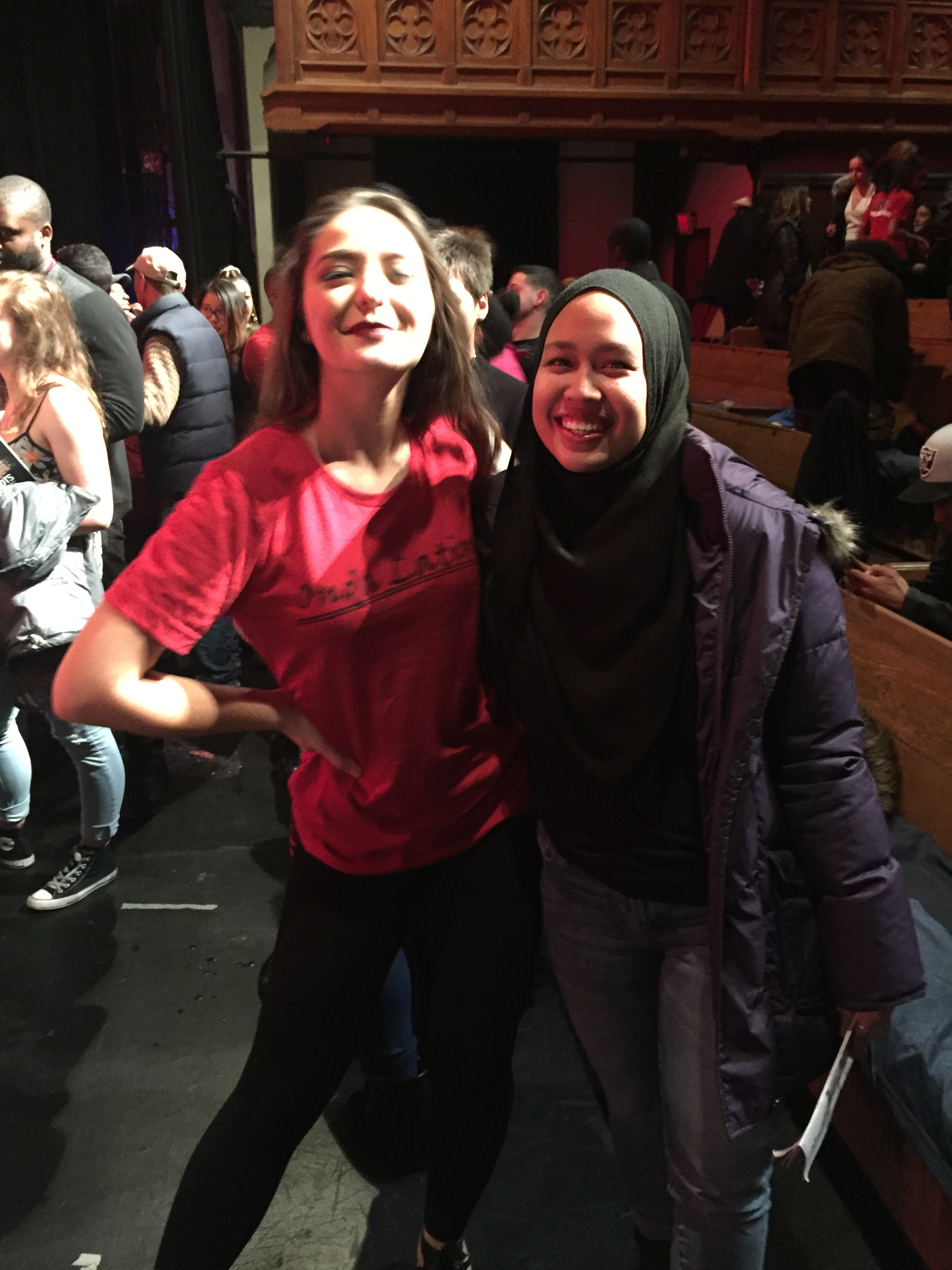 With Cristina after the show!

So yeah, it was a great week! It ended with me spending a nice long day in my apartment. I binge-watched 13 Reasons Why on Netflix which just came out this week and for the first time ever, I felt really old watching a high school movie haha. The premise of the show is this girl kills herself (uh, yeah, it’s a little dark…) and she leaves this elaborate “list” of 13 reasons why and each one is a person, detailing how someone at school abused, took advantage of or just hurt her. It has a very very strong “moral of the story” vibe which at times seems a bit overdone. I’m not saying I don’t think the message should be weaker because I love, love, love the way this movie sheds light on the ways in which bullying is not so much a matter of direct action, and more a product of culture (guys not wanting to seem “weak” in front of other guys, people being worried about what other people might think etc) but at times it seemed too forced. With that said though, it was still a good show. I loved the subtle ways in which it highlighted how as a culture, we idolise people for their athletic/academic achievements even though they may be… mean, narcissistic, manipulative people. I also loved the diversity of the cast. For most actors, this was their first “real” job. The popular girl was black. There was a queer Asian girl. There were multi-racial couples and friend groups. The show passed the Bechdel test (do two women talk to each other about something other than a boy?—very few films pass this test). Characters were multi-dimensional. Dialogue sounded true to life. I was very happy with all of that and I’m so glad platforms like Netflix are creating opportunities for shows like these which have been ignored and written off by media conglomerates for so long.

So yeah, I guess that’s all for this week. I hope you’ve had a really good week as well. My quiche is done and I’m going to go dig in now 🙂 until next week, thanks for reading!

One thought on “I finally ran out of ideas for titles.”