I’ve had a good, pretty fun first week back. First of all, my classes seem pretty chill this semester compared to what I had last semester. Or at least, they seem that way for now. I have my Psychology Independent Research, which is a continuation of last semester’s work at a psycholinguistics research lab. I also have a Judgement and Decisions lecture; I was adamant about not taking another psychology seminar this semester. For anyone who isn’t familiar: lectures are huge classes and you don’t participate very much, but seminars tend to be about 10-15 people and the whole thing is discussion based. Seminars last semester were just too much work—like 100 pages of readings per class per week—and I never had time to do anything else if I wanted to get those done and get them done well. Apparently the professor for the lecture I’m in now is super chill; he lets us take open book exams and I’m all for a relaxed final semester academically so YES.

I also have to spend 3 hours a week in an intro Psychology lecture because I’m TA-ing for the class. It’s now my third semester sitting in PSYC 001 lectures! It’s particularly interesting this semester though, because this Spring, it’s being taught by Professor Connolly, who I took intro with in my first semester at Penn so there’s a nice little “comes full circle” thing going on. 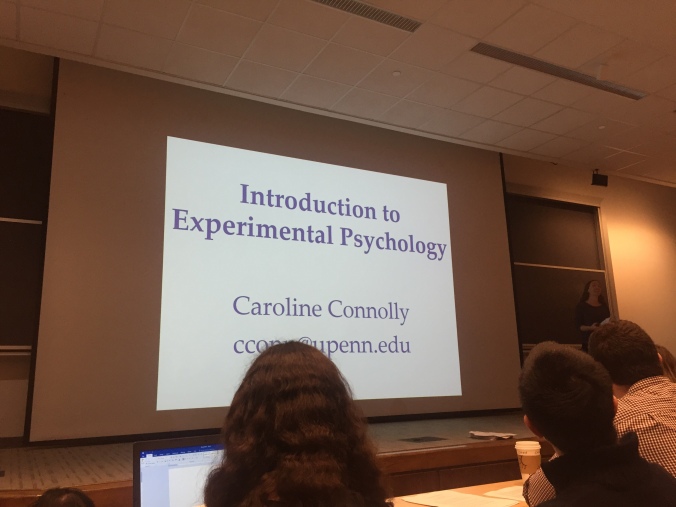 Apart from Psychology courses, I’m also taking an intro Astronomy class which is like…. fine, whatever, I just need to take one science class to graduate so I’ll do it. I also have a creative writing class that I’m taking for fun that didn’t seem particularly fun last week so I might not stick with it but that’s yet to be determined. Hmm. I do want to practice my writing, but how much of that has to be done in a class setting? Especially if the class kind of… annoys me.

I am particularly excited about Penn Perspectives, though. It’s a lecture series for seniors, and in our applications, we stated who our favourite professors were (mine was Professor Pollack, obviously) and which professors we’ve always wanted to take classes with but never got to. Based on that, they invited a different professor to give us a lecture each week—no homework or anything, just attending lectures for the sake of learning. Our first lecture was by an accomplished psych professor, Paul Rozin. Interestingly, I’ve had one lecture by him each year at Penn haha.

But anyway, this week was so nice for, *deep breaths* so. many. reasons. Primarily, my beloved Hui Jie is back from Copenhagen!!! She doesn’t live across the hall from me anymore but better two blocks over than across the freakin’ Atlantic. We had our favourite takeout together on Wednesday night, class + lunch together on Thursday and she came over today to hang out with me. I got to give her the birthday present I got for her in London and we shared pictures from our trips while we sat on my living room couch and it was just really nice to see her again. The last time I saw her was in July when I visited her in Singapore, which was just too long ago.

HJ and me with our matching gummy smiles, striped shirts and fried rice ❤

She’s back to sleeping on me. 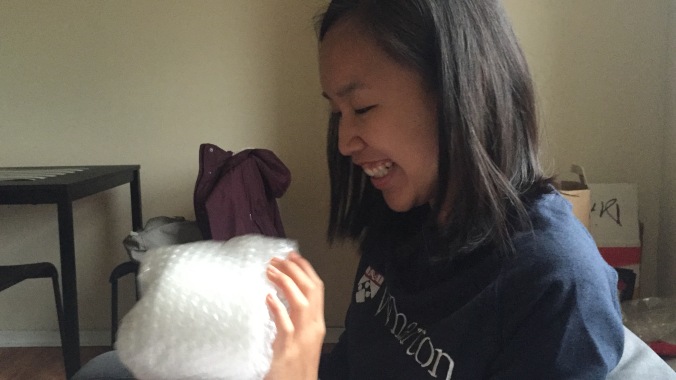 In general, I just really liked seeing all my friends again this week. May May and I made a trip to Trader Joe’s together and caught up on our winter breaks. I cooked dinner for Kim on Monday. Jamie and I had ice cream together late night on her bedroom floor. Shi Yi gave me amazing hot chocolate and hung out at my place playing Rubik’s cubes with me and Shahirah. Oliver got me biscottis from Flour Bakery in Boston on his birthday. Excuse me for being cheesy, but I will never take for granted the love I feel just having these people around me.

I made sweet sour fish and stir fried vegetables for dinner, which Kim and Jamie loved (or at least, said they loved lol)—it made me so happy. 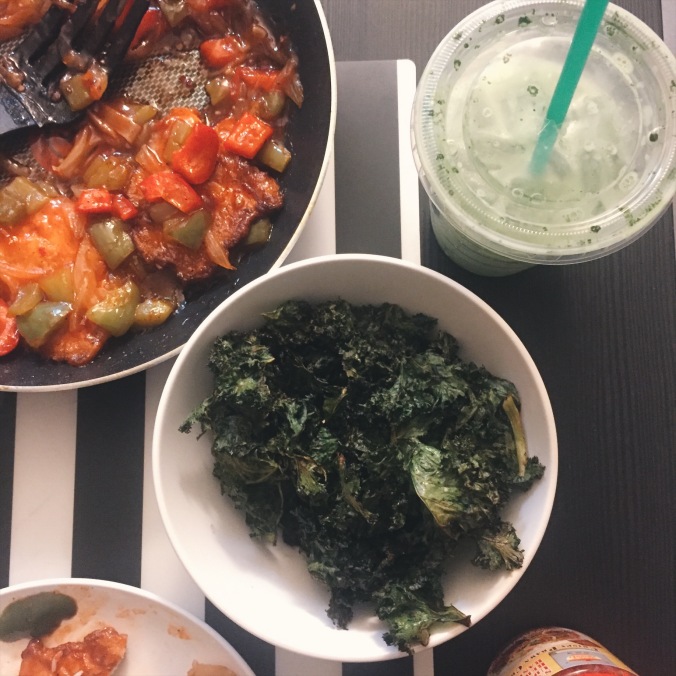 Continuing with my kale chips obsession. I’ve gotten Jamie and Kim onto this kale chips bandwagon with me. Kim got me my GTL from Starbucks!

It’s also a really exciting time at the cinemas right now, isn’t it?! In the past week, I watched La La Land with Shahirah and Hidden Figures with Ken and Selina. I loved them both so much for very different reasons.

La La Land was beautiful. I was so taken by the cinematography and the creative uses of sound, if that makes sense? The composition of each shot, the colours, the outfits… Every single scene was truly a sight to behold. I also just love a good I-want-to-follow-my-dreams story, so when you toss in the fact that it’s a musical with large dance numbers and a somewhat complex love story, it’s basically a formula for Dayana’s Perfect Movie. It just lifts your spirits. My sister Julia and I have pretty much been hooked on the soundtrack for days. I think the main reason I loved it though, was… hm, how do I say this without spoiling the movie? I think it represents the way my memory works, and the way I think about things in my own past. Yeah. That’s it.

La La Land was only showing at Ritz East and a trip to Old City is not complete without a quick stop at Franklin Fountain. This parmesan ice cream was amazing.

Hidden Figures was also fantastic, I highly recommend it. I think Hidden Figures is probably more appealing to a wider audience than La La Land was because I can imagine how some people would watch the latter and just be like “that’s it?” but the former is more exciting plot wise. It’s definitely my favourite ~space movie~ (let’s not talk about Interstellar, gah, I hate that one). I mean, it obviously wasn’t just about space. It deals with the deep intersections of race, class and gender in the workplace, within our families and in our greater societies. The events of the film take place during the segregation and I remember thinking, I thought I knew how segregation was bad but every time you see it being played out you gain a deeper appreciation for how atrocious it really was and for me, it affirmed my faith in art as a means for building empathy while also entertaining. Even though Hidden Figures revolved around a huge things like space mission and racism, it still manages this lightheartedness because it makes you laugh and I greatly appreciated the balance of seriousness/lightness.

I’ve also been doing a lot of cooking experimentations which is really fun! I always enjoy cooking because I feel like it’s a creative, healthy way to practice taking care of yourself. This past week, I’ve mostly experimented with breakfast foods. I just am such a huge fan of brunch that I always find myself tempted to make those kinds of foods. I cut open a ripe avocado for the first time this past week and I’ve been enjoying having avocado with my eggs for breakfast. I also made smoothies and rosti which were so good. I’ll probably detail all of that in a separate post because this is already getting pretty lengthy, haha.

Until then, thanks for reading 🙂