I went to Melaka last weekend with my parents and it was pretty fun! We were there for such a short amount of time, just over 24 hours, I think. But visiting Jonker Street is always fun, there’s just so much to see at once. Getting my Pak Putra fix is also always worth the 1.5-hour drive. I literally forgot to take any pictures because I was so preoccupied with taking videos the whole time. But! If you are interested in some ~visuals~ here you go:

I’ve been playing with iMovie a lot, because I just realised how much fun it is. I’ll be going on quite a few more trips before the end of summer actually, so I’m hoping to do one for every trip and see how much better I get 😀

I also did something (trivial) this past week which I felt I absolutely had to write about because it was so quintessentially me; so comical and nostalgic all at once.

So, I was at Petronas to withdraw money, because for some reason the petrol station is the only place I can withdraw money in my neighbourhood. The line was super long, and as I was queueing up, my eyes started lingering around the shop and I saw so many things I wanted. Surely enough, I came out with a bag of butterscotch Gardenia bread, a Crunchie bar, Twisties, Chipster, Honey Stars and SUPER RING!! I was SO happy, you guys. You have no idea. I had not intended to spend >RM20 at the Petronas shop but now you know why the Maybank ATM is there and why there’s only one of them. So that you have you wait in a long line and then come out with 6 things when you intended to buy none. Obviously I’m not very proud of that but like, you should consider that I restrained myself from: a bilis bun, a jagung bun, F&N grape, Crunch ice cream, and a Gardenia breakfast waffle so I THINK I DID JUST FINE.

Nevertheless, my parents and sister saw me walking out of the shop, all mouths agape, half shocked and half amused. 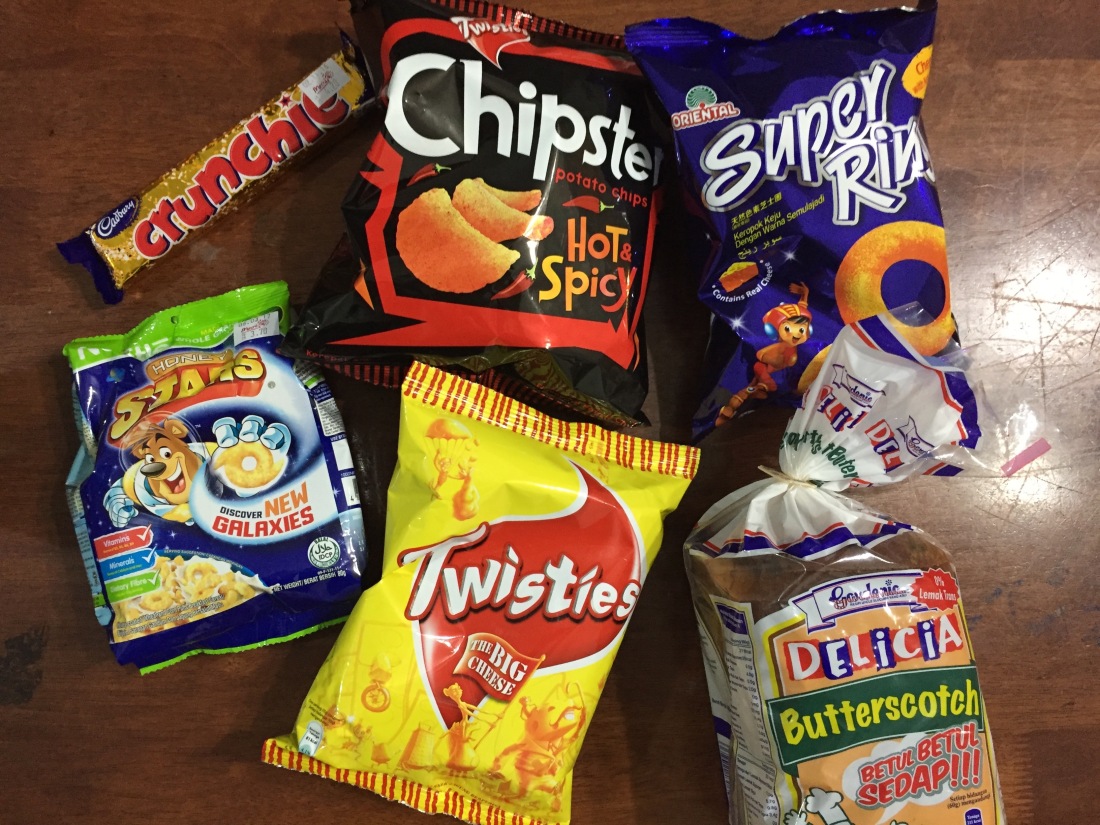 Nostalgia has this warm fuzzy feeling to it but when seeing food makes you feel nostalgic? It’s so much better. You can literally taste it. Anyway. I told you it was trivial. That was it, that was the story.

Speaking of nostalgia though, this past few days, I finished Americanah by Chimamanda Ngozi Adichie. It really is a wonderful book. It is long, and I’ve managed to get to the 100-page mark several times before, but always ended up having to put readings for classes first. According to Adichie (from this interview), “Americanah is about a young woman, Ifemelu, who leaves Nigeria when she’s a teenager, comes to the U.S., spends 13 years and then goes back to Nigeria. And in those 13 years, many things happen. And it’s also about Obinze, who’s her childhood love, who leaves Nigeria to go to the U.K. and who then returns to Nigeria. So for me, it’s a novel about leaving home as much as it is about going back home, and really about what “home” means, and if you can go back home.” I think if you’ve spent a substantial amount of time living abroad, adjusting, especially as a minority, this book will really clutch onto you. Adichie says it’s not totally based on her life because her life was “not as interesting” but the general feeling of it however, is:

“I was in the U.S. for 4 years before I could afford to go back home and even then, just four years later, I had this feeling that Nigeria had left me behind. […] You leave home and then you create home in your mind, and then you go back and it’s not what you built up in your mind and then there’s a sense of loss. Because things happened and you weren’t there.”

And the writing, oh my god. Poetic. The words flow so smoothly and describe emotions with so much precision. Also noteworthy is that I found it refreshing to read a novel not centered around… white people. Adichie sporadically throws in Nigerian words/phrases with no translation or glossary and she talks about Lagos and Abuja which would never get airtime on mainstream TV/film, and so you just kind of dive in and learn about it in all its normalcy.. and I feel comforted to know the world is so much more than America and Europe, more than what pop culture sometimes makes out the world to be. So yes, I 10/10 would recommend.

I’ve just moved on to the next book yesterday, which is Predictably Irrational by Dan Ariely, and it’s one of those “pop psychology” books. My reading speed has taken a hit because that’s usually what happens when you start a new book and you haven’t gotten into the meaty parts, especially if I’m moving from a fiction to a non-fiction book. My reading list for these few months is pretty long! I am hoping to at least finish 5, and I’m already done with 2 (the other book I read was Originals by Adam Grant, really good as well!) but I start my internship next month so we’ll see how that goes.

EEP. That means the next time I write I’d have already started my first day at work. I can’t wait to know what that’ll be like.  😮