I want to start by acknowledging that I do complain about Penn a lot. It is overwhelmingly competitive, stressful, tiring and annoying. It’s like trying to take a sip from a waterfall, sometimes. But of course, waterfalls can also be wonderful. This past week was pretty great, and I am writing while looking out my window, realizing for the first time this semester that the trees are green again.

Today, I had lunch with Professor Pollack who teaches my International Political Economy class. Anyone who knows me knows that I rave about his class constantly. I have to write 5 two-page papers for his class (and again, if you know me, I utterly despise writing papers for classes) but even while I’m writing my IPE papers I’m like “OMG I love this class!!!” First, Professor Pollack is exceptionally engaging in the classroom and he’s so good that, quite ashamedly, it’s the first semester I’ve had a perfect attendance record for a 9 a.m. class.

Pollack explaining that he searched for “Asian Tigers” on Google images and thought this was too cute not to use.

The course content is also really interesting; it covers topics like economic history, financial and sovereign debt crises, trade and multilateral agreements, monetary policy, development etc using the framework of interests and institutions. So like, what are the interests of the different groups of society when it comes to trade, for example? What are the roles of domestic and international institutions? I think the framework is also really useful to learn because I’ll be the first to admit that I don’t know a lot about the world, but this class truly has helped me learn to become an informed member of society… if that makes sense.

Anyway, enough nerd talk. Lunch with Professor Pollack was so much fun. I understand professors are accomplished people with busy schedules so the fact that he willingly sat down with me and my friend Christina for two and a half hours just talking about what he’s learned from being in his field, from teaching, from parenting and from life in general really meant so much to us. He talks about the colleagues he admires and calls them “superstars” but oh my god, as far as Penn professors go, he’s definitely one of my superstars. I’ve said it before, but I think people who offer their time and their insights to others so kindly are so generous and I am thankful to know people like that.

And speaking of superstars, (wow, what a smooth transition!) apparently, Penn is full of them. In the past two weeks, I’ve gotten to see 2 shows put on by Penn students. The first was Memphis, put on by the African American Arts Alliance. It’s set in the 1950s and centers around a white DJ, Huey, who plays black music on the radio, and falls in love with an African-American singer, Felicia. I went to see it because my friend Habeeb was in the band, playing the drums, and I’m so glad I decided to go because I had so much fun!

Me smiling super wide because I was SO proud of Habeeb!!!!

I had just met Sylvia the week to prior to this but I was so thrilled to see that she was one of the dancers in the show.

This past weekend, I saw All Shook Up, put on by the Quadramics Theatre Co. It’s a whole musical built up of Elvis’ hits and it’s some kind of a love pentagon (?) kind of story which starts off with this “roustabout” coming to town and shaking things up. My god, I, love, musicals. LOVE THEM. Seriously, I had such a great time. And considering I went to see the show alone, I really had a great time.  Like the other show, I went because my friend Clare is involved with it. We had brunch a couple of weekends ago (at the place with the best hot sauce I’ve had in America) and she told me about how she’s assistant stage manager so I wanted to go support her and again, I’m infinitely glad I did. I’m so, so proud of her! Plus, I later found out that my classmate from cultural psychology, Nate, was also one of the cast members. I was also happy to see him perform and was just amazed by his (and the other cast members’) performance. 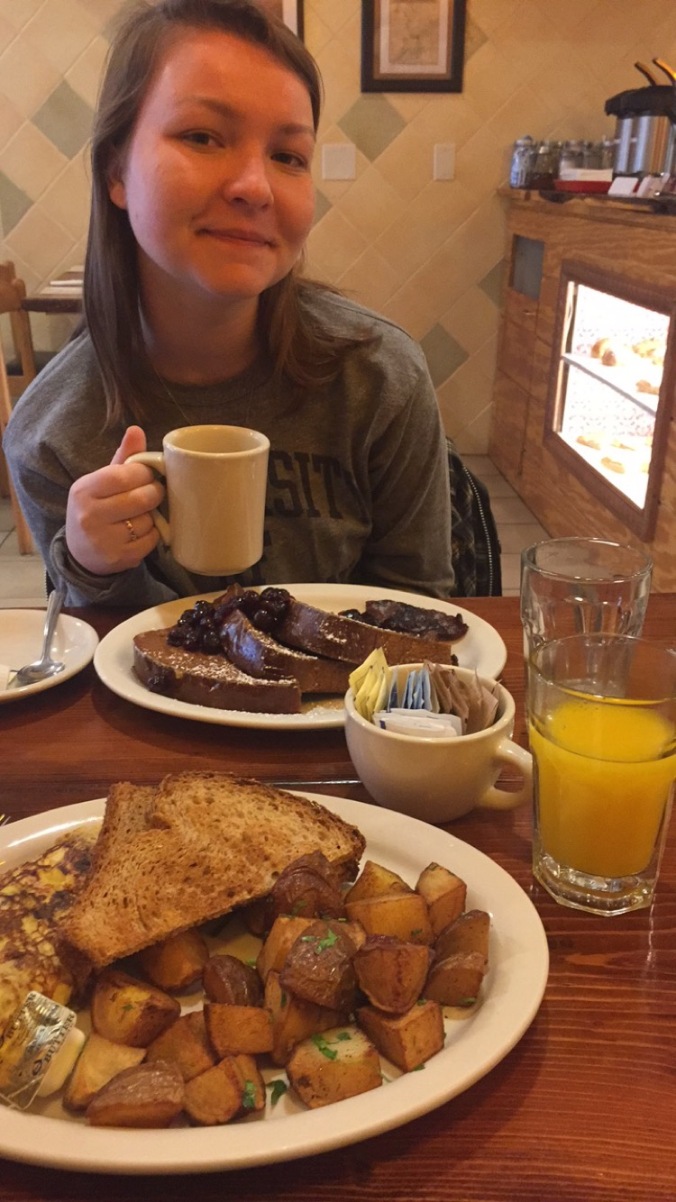 Brunch with Clare at Renata’s Kitchen!! 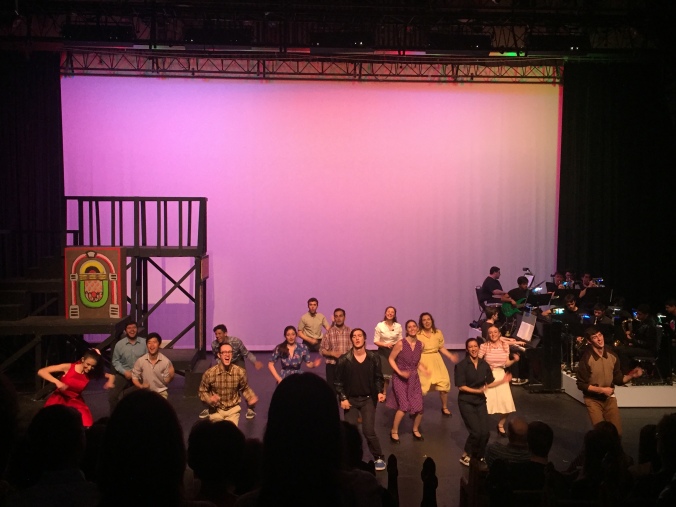 I wish I took better pictures of the show lol

That’s Nate in the front/left 🙂

With Clare after the show!

Not only were the two shows spectacular, but I also really love taking a step back to just be in awe of the amount of talent I am surrounded by here on campus. Because, I mean, on a day to day basis, it gets overwhelming. I sometimes feel like I’m the only one here who isn’t doing 50 things at once. But other times I get to realize how lucky I am to be around friends and other Penn kids who are just… remarkable.

Watching All Shook Up was just one part of a great fling weekend, though. So, if you’re not from Penn, Spring Fling is what some people refer to as a “weekend of debauchery” — there is a carnival in the Quad, a huge concert on Friday night (this year we had Chance the Rapper, last year was Kesha and the year before, we had David Guetta), and, from what I gather, many many many frat parties. As you can imagine, that’s not a lot of fun for me. I don’t love the crowd and I don’t wanna fork out the money to go see a performer I won’t enjoy, so I’ve never had the “conventional” fling experience. Instead, my friends and I do what’s fun for us. On Friday, I went to Fairmount Park with Hui Jie, Jamie and Selina. We saw the quaint little Shofuso Gardens and took lots of silly pictures. Later that night, Adel and Ahsen had a bunch of MSA people over at their place and we played Mafia and ate desserts and somewhat surprised Sanaa for her birthday at midnight 🙂 On Saturday, as is tradition now for the class of ’17 Malaysians, we have a fling weekend picnic! I think part of what I like about being a junior in college, is that I now know how to navigate parts of college I don’t enjoy by doing things I do enjoy and being with people whose company I value. 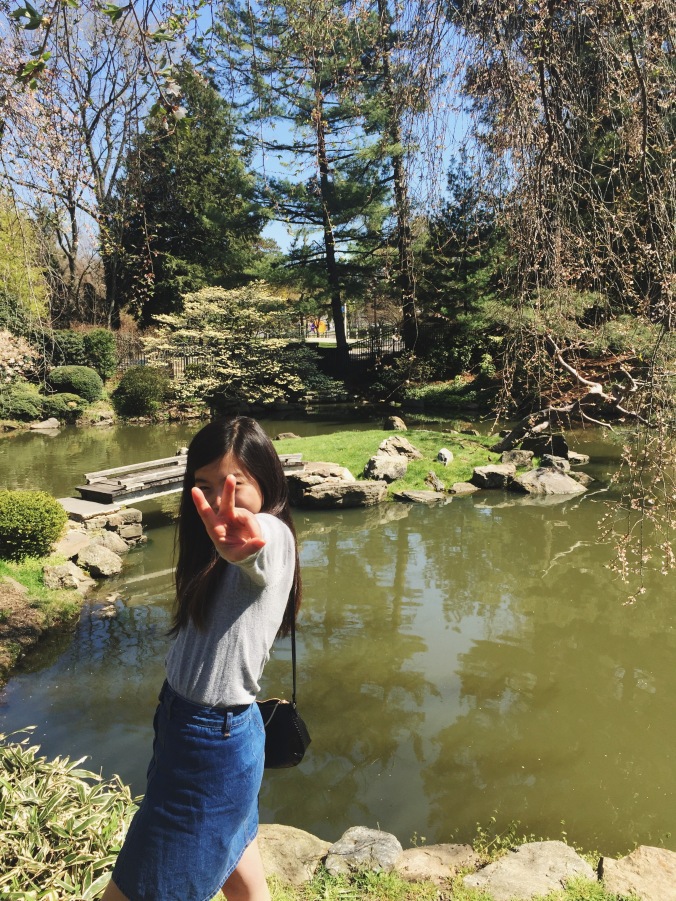 The koi came to her because they thought she had food 😦 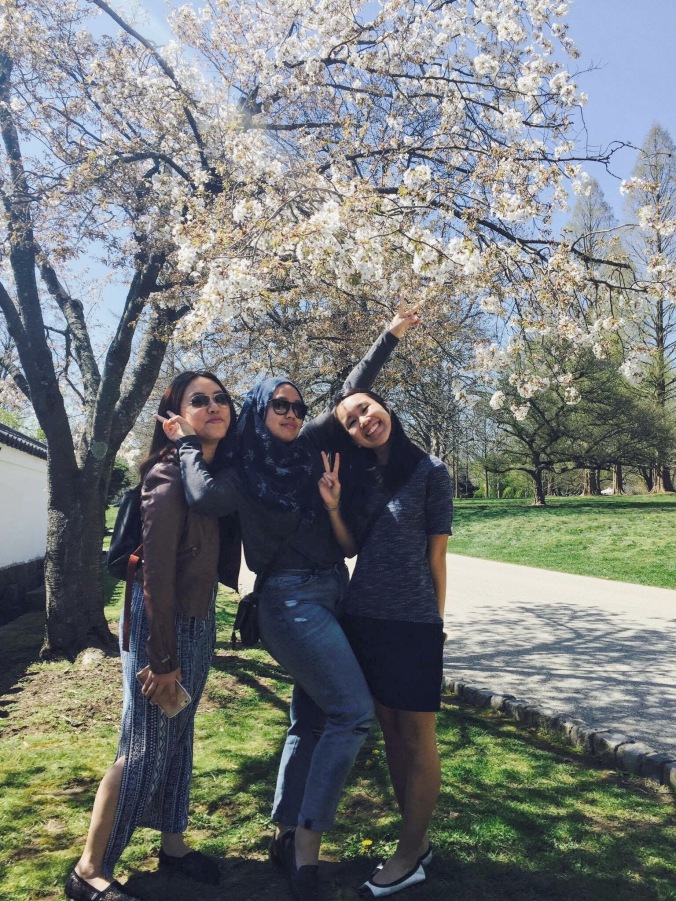 Jamie, Hui Jie and I at the entrance of Shofuso gardens.

The whole gang at Adel and Ahsen’s place! 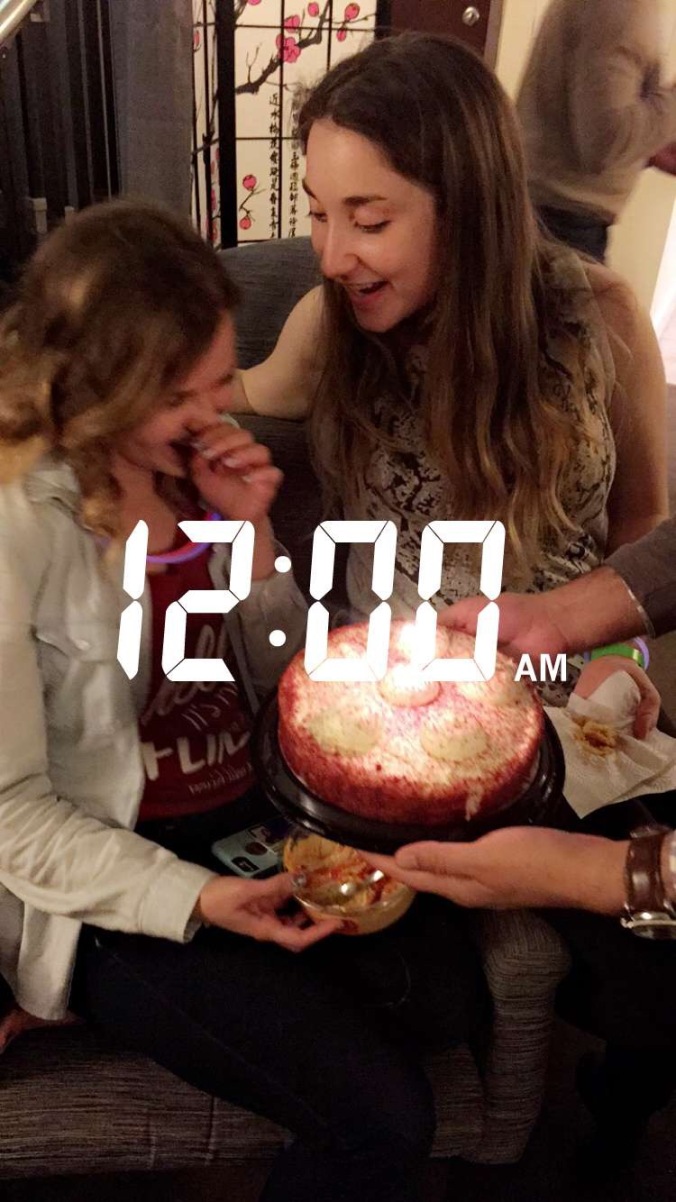 The birthday girl surprised with red velvet cake while eating hummus with a spoon!!

In fact the entire last week was pretty good. On Wednesday, I got to attend a talk by, or, well, I guess it was more of a conversation with Ben Bernanke. He was the chair of the Fed during the American financial crisis and given everything I had learned in class this semester, it was super interesting to me. He talked a little bit about how he got to where he is, defended the decisions he made during the crisis and talked about his book “The Courage To Act.” It was pretty cool to be, as Professor Pollack said, “in the same room with a historic world figure.” 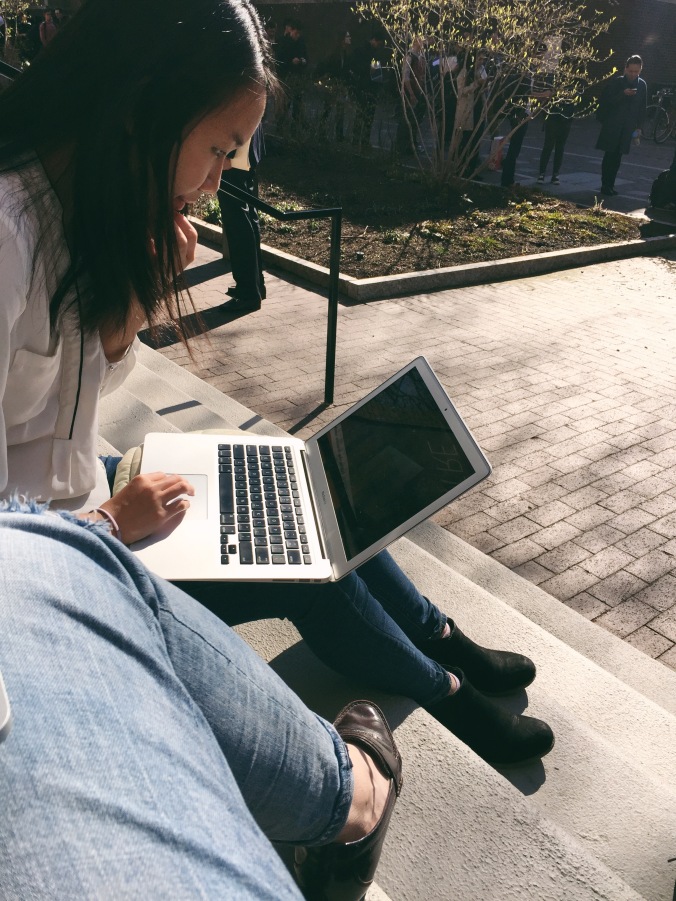 Sitting on the steps outside of Annenberg because the line to see Ben Bernanke was out the door over an hour before the event.

Summer break is fast approaching and as the semester is kind of winding down, people are trying to catch up with each other. It’s quite difficult to see all the people you care about consistently throughout the semester because we have a lot of papers to write, hundreds of pages to read, exams to take, meetings to run and etc… so I appreciate it when friends like Iman understand that and give me room but also let me know they’re there for me if I need them. Iman, exactly one year ago today actually, helped take care of me when I had my wisdom tooth extraction. Even though I don’t see her a lot, I know she’d still make time for me 🙂 we had the chance to grab dinner last week at Honest Tom’s (ahhh their sweet potato tacos!!!) and it’s really nice to end a long day with a good friend.

The most generous serving of guacamole. 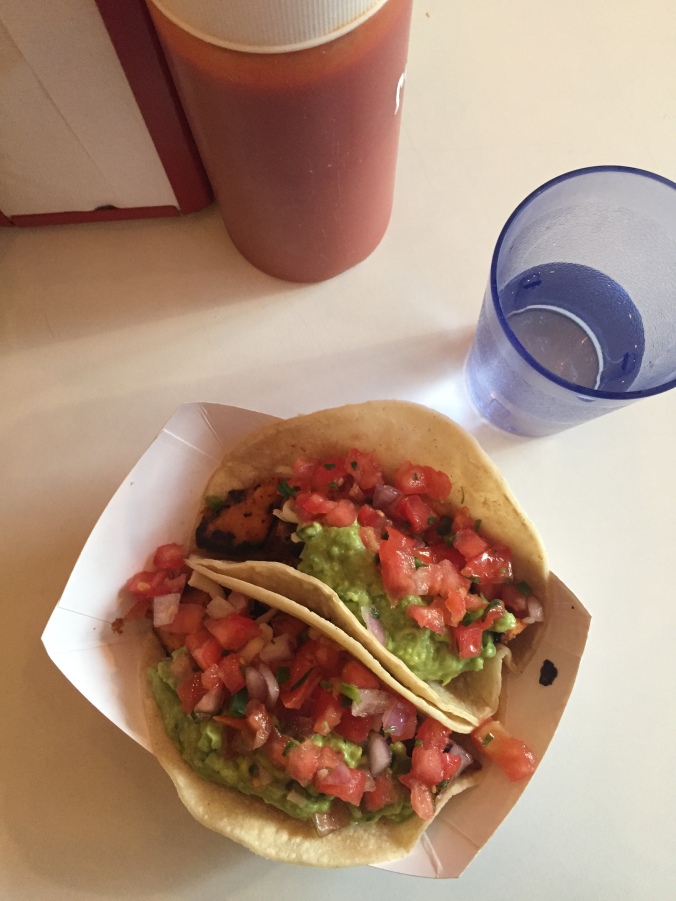 Sweet potato tacos are so good.

Shahirah and I also got to catch up with Marcus, who’s a Malaysian graduating this year!! We always say he’s kinda like an uncle because of his mannerisms but we love him, he’s so nice. I also love that he’s the first guy I’ve met who is as scared of dogs as I am. He took us to Dock Street for pizza and it was one of the best pizzas I’ve ever had! Maybe the best but I’m refraining from making that statement because I know I have a tendency to overuse superlatives. The pizza I chose had brie and pear on it, which was a delightful combination. The one Shahirah chose had egg on it!!! I LOVE EGGS so yeah it was 10/10.

Waiting for the trolley that never came. 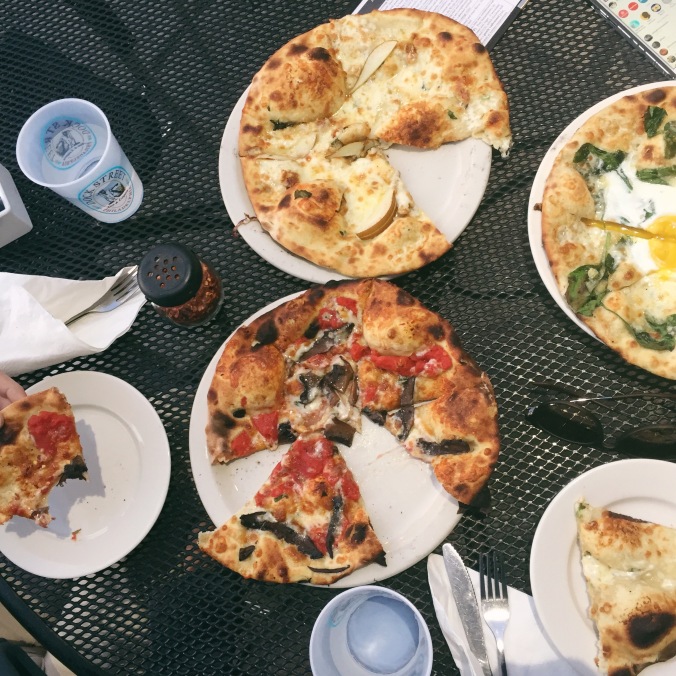 Next week is the last week of classes!!!! I am so excited because it’s Hey Day next week, which is when the juniors march down Locust Walk and are “declared” seniors. And also because I am tired and ready for a break. Anyway, so I think this post is long enough, and I’ll leave you for now. Byeeeeee.