I’m done with my second round of midterms! I had exams on Monday and Tuesday this week, so even though it’s only Wednesday right now, I feel like it’s already Friday. To those of you back home who don’t know, in American colleges we have midterm exams throughout the semester. Instead of having one set of exams at the end of the semester, we’re kind of being tested by stages. I used to think I prefer to be tested this way, but it’s so tiring. I spent the whole weekend staying in and doing work. I missed out on some fun, but it’s okay because I felt really good walking out of those exams. I don’t know how I did, but it just felt nice to know I gave it everything I could. 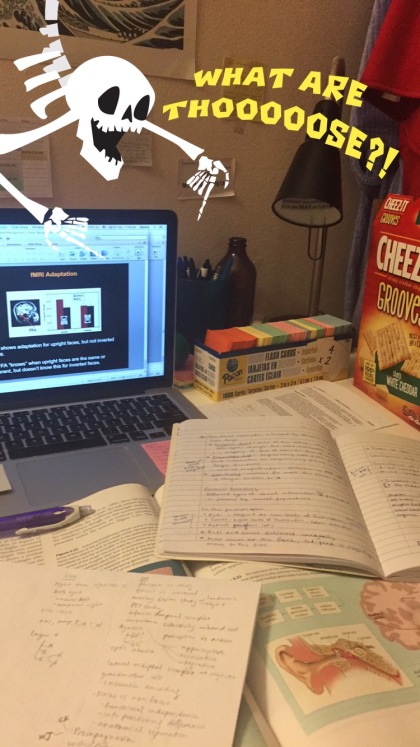 I clearly did nothing for “halloweekend” but wanted to use these snapchat filters anyway.

Monday was a particularly long day. Reviewing, exams, class, more class, and then office hours, review session, a meeting, reviewing more exam material and getting help from Adel. I mean yeah, that’s what we do in college I guess. But having everything going on back to back like that.. ahhhh. I was so pooped out. 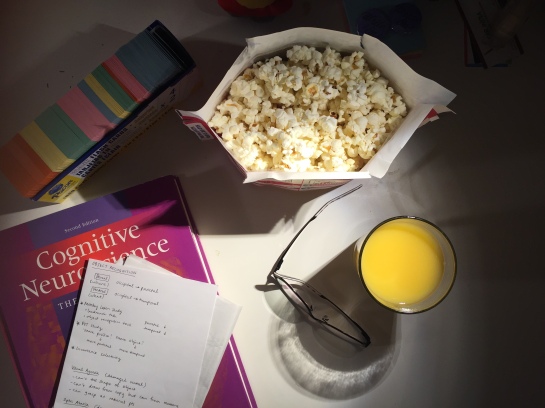 Studying for my cognitive neuroscience exam. To my parents if you are reading this: don’t worry, I promise I don’t eat like this everyday. 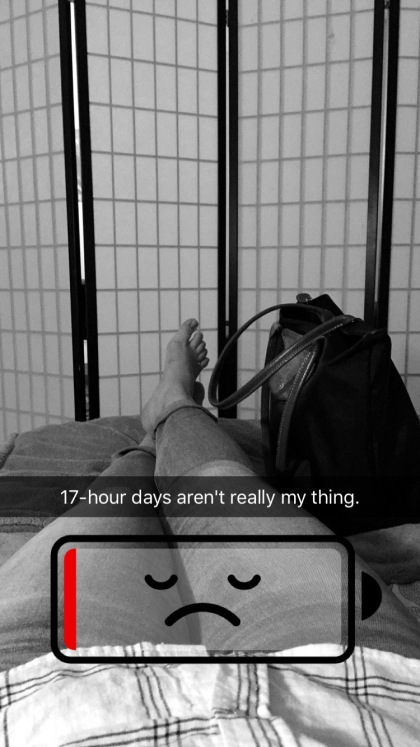 Monday night, when I finally got home at 11 pm.

I’m glad I managed to squeeze in some cooking over the weekend though! I made pancakes and fried rice for Hui Jie and myself. We basically spent the whole day in the apartment eating all the food slowly. I also made chicken sandwich filling the way my mom makes it, and I was so happy about it because it made me feel like home a little. 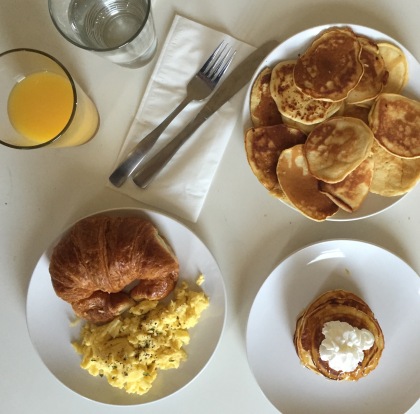 Got up super early to make breakfast. 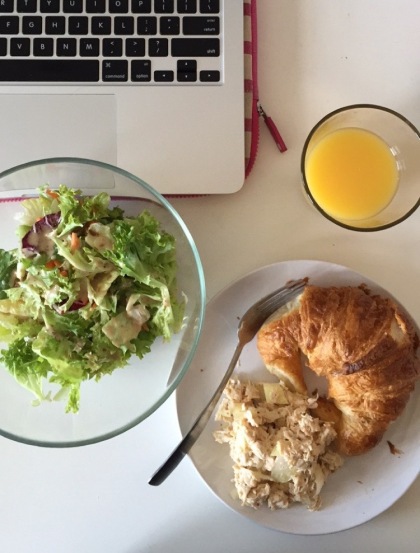 Other things I like about making chicken sandwich filling: it masks the taste of chicken (which I don’t like), it lasts a while so I only have to make it once and all the other times my meal prep is super easy, I can make a sandwich out of it or put it in a salad, and I think it’s healthy-ish? 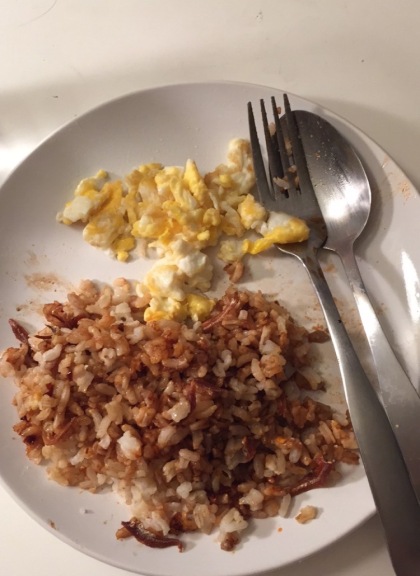 By Monday though, I was super lazy and just ate eggs, rice and kicap  (soy sauce) lol. Hashtag: things I don’t put on Instagram.

By Tuesday night, I was done with exams so I slept super early because I was tired. But I had some readings to do for my political science class and had to start doing them at 6 a.m. the next morning (i.e. this morning). I felt so restless though because I hadn’t been to the gym since last Thursday and after being done with my exams I just really wanted to go so I got to make it out to a PiYo class today. 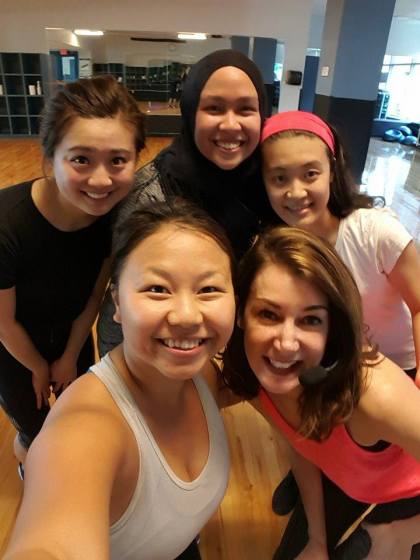 With some of the girls in the class after PiYo. Angela, the instructor, is the one on the bottom right 🙂

I was super excited about this because I used to go for PiYo classes at 7.30 a.m. every Friday (ok, most Fridays) last year. This year, it got moved to a 12 p.m. slot and it doesn’t really fit with my schedule and I spent all semester missing this class because I loved Angela, who is the instructor. Plus, the gym classes I’m doing this semester really lack cardio stuff — which I hate doing, but I mean, it’s good for me or something like that. 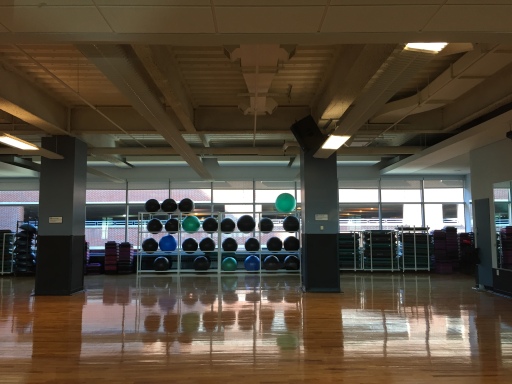 I’m not the fittest person on earth and am nowhere close, so I probably shouldn’t go around touting the merits of exercise… but honestly, it’s wonderful and we should all be doing it consistently in some way. I hated exercise before I discovered the type of exercises I liked and the setting I like doing it in. Since sophomore year, I started going to group exercise classes and it’s been so much fun.

Just like cooking, it really forces me to be present and to focus on what I’m doing. It lets me practice being intentional about every single movement I make. Also, it hurts. A lot. Everything burns: my thighs, my arms, my abs. But that’s what I love about it most–not because I love pain or discomfort, but rather, because it teaches me to keep pushing. I think I manjakan (have babied) myself a lot. I would do work and get sleepy and go, “maybe I need a break” when I don’t. So I need to remind myself that some discomfort and pain isn’t a good enough reason to stop. Just wanting to give up isn’t a good reason to stop. Feeling tired isn’t a reason to give up. Not being very good at something isn’t a reason to give up. I keep going, and that’s what will make it better. I know this sounds motivation-speechy which is like *gag* ugh, but I’m getting at something here, I promise, and that is, knowing when to give up is really not easy. There are times when I really do need to step back and let go a little, but knowing when to do what requires listening to myself and being super super honest and confrontational with myself. That, is what I love about exercise. 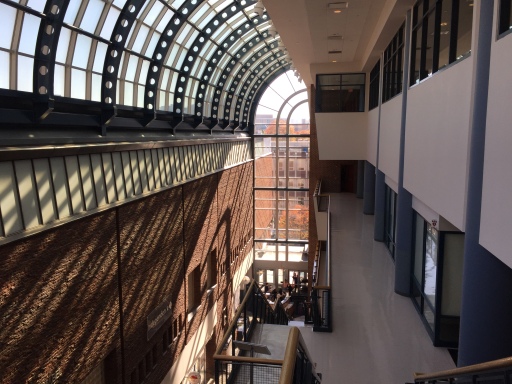 So there I was today, walking out of the gym, dripping in sweat, wobbly legs and feeling very satisfied.. when I remembered that Viraj (one of the staff at PAACH) baked cookies and made a post on Facebook about it saying we should drop by if we want some. Naturally, I did. Usually, I would’ve gone home for lunch but today I decided to stray from my routine.

As I was waiting for my next class at PAACH, someone walks into the room with Jenny Yang and introduces her to everyone. Jenny is an Asian-American comedian and writer. You may have seen her on BuzzFeed, like here. This is a cool article about her, and this is her website. I am glad to have gotten a chance to speak to her today. She was talking to a girl I know, Caroline, encouraging her to put herself out there with her photography (Caroline is amazing, check out her work here!). I kinda just joined in.. She talked to us about how we should put our names on the work we do and believe in, and fearlessly put it out there. She also talked about how everyone has a valuable story to tell, how you don’t know who you will reach/move with your work, and how it helps to be in contact with the world you want to be in because even being around the thing you love will help a lot. 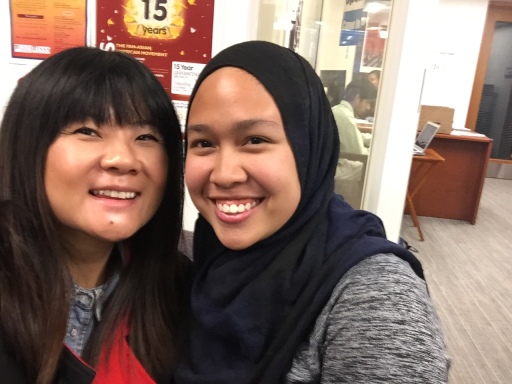 Me with Jenny earlier today at PAACH ❤

It was really cool to get to speak to her even though I only saw her for about 20 minutes. Interestingly, this happened at a time when I was contemplating whether or not I would want to continue blogging/writing next semester and onwards into the future. I think Jenny gave me some good things to think about, which was awesome because I didn’t even know when I woke up this morning that I was going to meet her today. And if I hadn’t gone to the gym, if Viraj hadn’t baked those cookies and made an announcement about it on Facebook, I might not have. It’s also amazing to see what resources can reach you once you open up about your hopes/dreams and the things you care about. If Caroline hadn’t been brave enough to tell Jenny, “hey, I want to show you my website” we probably wouldn’t have ventured into that conversation.

God, it’s the little moments like this that make me trust in every crooked step of my life path. Earlier this year in February, I wrote this in my journal: 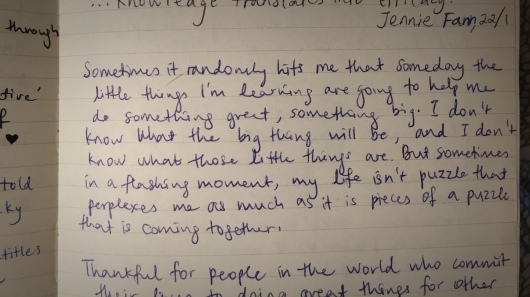 And this really feels like one of those times.

I always try, or I always want to refrain from publicly giving advice on here because if there’s one thing I know, it’s that I don’t know much at all. But sometimes I learn simple things which can be so profound to me–as simple as the cliché “everything happens for a reason”–and I just feel like it would be a waste not to share, so there it is.