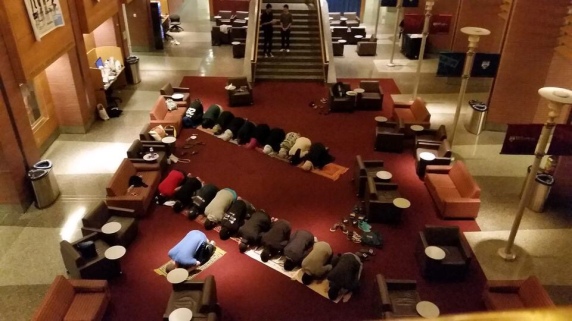 My MSA friends praying in Hustman Hall. I wasn’t there because I was sick 😦

Hey friends! Selamat Hari Raya Aidiladha, Eid al-Adha Mubarak 🙂 I’m done with about a third of my junior fall semester alhamdulillah. I think I’m still doing pretty well, and I’m still on track, and I’ve learned now that I need to pat myself on the back when I am doing good. However, I’m experiencing a little itsy bitsy minor hiccup as we speak because I’ve fallen sick 😦 I think it’s just a normal cold/headache/fever thing, and the doctor said it could be due to stress. I had the same headache for 3 days and yesterday Panadol didn’t even work on me so I was very worried and went to Student Health Services (SHS). They gave me a painkiller shot which should make me better soon, but I’m also eating lots of fruits and drinking warm milk with honey so insya Allah (god willing!) I will be up to my normal level again in no time. I’m writing this as I’m cozied in bed with a body temperature of 39 degrees C, at 5 a.m. on a Thursday morning because I’m supposed to “take a break” but I can’t sleep.

I’m usually not one to wear socks indoors, but this sure feels niceee.

Interesting things that happened this week? I had my first exam for the semester and it was on Evolutionary Psychology. It went okay, I suppose. I did my best and I think I did everything I could to prepare so I’ll be fine with however it turns out. 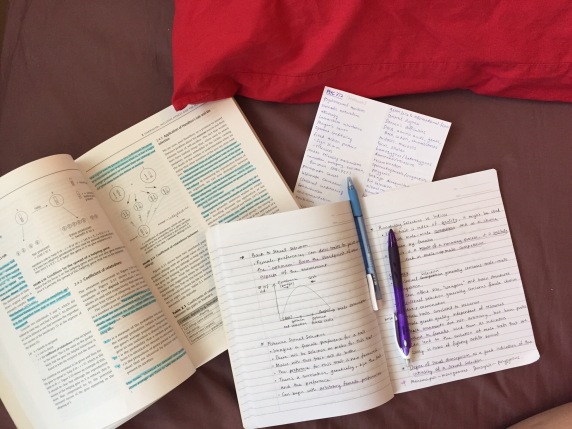 I went to my friend Ken’s house for the first time for his housewarming party. His roommates Lian Han and Shaun were very nice and hospitable. They had longan and lots of my childhood snacks, which really made my day.

My friend Cristina had a simple presentation on the history of Palestine, and I went to support her. I think she was quite nervous because as she said, it was her first time “taking on more of a role”. But she did really well and I’m proud of her! I love being around people who are passionate about great causes.

The most exciting thing that happened to me this week actually didn’t really happen to me. My sister started university! She’s now a first-year medical student at Barts in London! I’m super proud of her, because it has always been her dream to study medicine. She has known what she wants for the longest time and worked consistently towards it for years and years. I know many of you who are reading this know her personally, so you know what a hardworking person she is and has always been.

Earlier this week, she texted Julia and I saying she feels like an ant in a sea of elephants. My heart kinda sank a little, because I remember that’s how I felt throughout my freshman year at Penn and it sucked. I never felt like it was okay to not be working because I needed to catch up, to measure up to all the other kids. I always felt like I needed to be doing 5 more things than I knew I could handle. I would turn to the mirror, confused, when people called me “capable” or “smart”, because I was aching to see that in my own self. I can’t say I’ve completely stopped feeling that way, but it has gotten a lot better as I’ve gone through a couple of years here, and I’ve mellowed down a lot.

Of course, it takes a lot to learn to shake that feeling off. Too often, people say “just be confident” or “nah, you can do it” or even “I believe in you” to remedy that. I understand that they’re well-intentioned, but these phrases never did anything for me other than frustrate me because they failed to recognise how far I felt I needed to go to feel confident. I thought I couldn’t “just be confident” because if it were really that easy, I would’ve done it a long time ago. I remember always mentally retaliating, “Well, tell me how! Somebody tell me how.“

So I’m not gonna say that to my sister. What I would say though, is to implement “circuit breakers”. Something that you know will help you when you feel that way. It’ll take time, naturally, to figure out what that is for her. For me, it meant keeping a note, and I mean like a physical piece of paper that lists a bunch of things I know will comfort me. There’s something to remind myself that the sincere and true effort of trying to get where I wanna be is worth so much more than actually getting there, because at the end of the day God knows what’s best for us. I remind myself not to compare my progress to how other people are doing because we’re just different. I write a favourite doa (prayer) asking for patience and strength. I try to tell myself that if I had what it takes to get here, I can make it another mile, and another mile, and another mile–one step at a time until I’m done. And so can she. I have so much faith in my sister, and I think she’s gonna do just fine.

So I’m gonna sign off now, get some rest and focus on getting better. The pope is coming to Philadelphia this weekend so we have Friday off (yay for long weekends) and that gives me some time to prepare for the craziness that is next week (I have 2 exams and an 8-page paper to write, eep!). But autumn has officially started and I can smell fall break around the corner, so that’s some light at the end of the short-term tunnel to look forward to 🙂

One thought on “Week 5: I Used a Disposable Thermometer for the First Time”